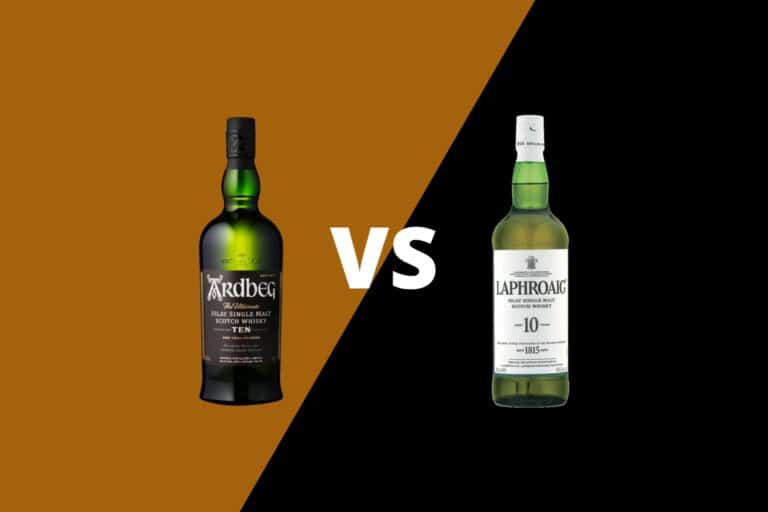 This battle of Islay is for all the peat heads out there. This matchup between two of the most well-known peated scotches is one that any serious Islay fan should understand.

Many whiskies may be described as ‘smoky.’ But if you hear someone describe a smoky scotch whisky with ‘medicinal’ flavor notes — there’s a good chance they’re describing a peated Islay malt.

But if all this talk of smoky flavors leaves you scratching your head, you’ve come to the right place. When scotch fans get to showing off their levels of knowledge, it can be hard to fit a word in edgewise. But this post takes two of Islay’s most famous distilleries — Ardbeg and Laphroaig — and pits them side-by-side.

This way, your taste buds will know what they’re getting themselves into.

The Ardbeg and Laphroaig distilleries are about two miles apart on the Isle of Islay — an island of mainland Scotland that is part of the Hebrides.

These two distillation sites represent a snapshot in time when distillers who had been operating as illicit entities suddenly went respectable. Investments in copper stills laid the groundwork of a single malt region that has survived as a distinct region well into the 21st century and thrives as a one-of-a-kind treasure coveted by passionate whiskey fanatics the world over.

Both brands have timelines on their websites. So, maybe we should do it here. You know, analytics, search optimization and all that.

Open scene: A foggy and ragged seascape, crashing waves and the smell of turf smoke in the air. The year is 1815, and King George III has just relaxed prohibitive taxes, allowing illicit distillers to go legit.

Laphroaig uses local Islay peat from the Glenmachrie bog and is one of the few distilleries in Scotland to malt their own barley. Ardbeg no longer has its own malting floor, and their malt comes from nearby Port Ellen. Both distilleries send spent grains to feed local cattle.

Laphroaig’s fermentations last for only 55 hours — a rapid turnaround compared to other types of whiskey. This is possible because single grain whiskies — made from 100 percent barley — do not need to cook and hold at high temperatures to induce saccharification the way multi-grain mashes do.

Ardbeg’s wash backs are made from Oregon pine, which creates a microenvironment in which colonies of microorganisms such as lactobacillus can add tart ester flavors to the ferment. Ardbeg also utilizes a multi-day fermentation duration — much longer than Laphroaig.

The source of water for the Laphroaig Distillery is the Kilbride Stream. It’s peaty in flavor. Pulled from the stream, it’s pretty muddy and full of sediment. The water used by Ardbeg comes from Loch Uigeadail, another native water source.

Both Laphroaig and Ardbeg have language on their websites that notes their distillers’ make the hearts and tails — or feints — cut deep into the run, which keeps more of the phenolic flavor from the grain in the finished product.

Fans of Islay malt may discuss phenol content. It’s a term that whiskey brands use to describe how smoky the whisky should taste, based on a parts-per-million basis. However, this ppm figure is based on analyses of the malted grain before it is ground, mashed and fermented. Various production attributes throughout the fermenting, distillation and maturation process influence how much of the overall flavor will reflect the peat smoke used in the malted process. So, while the phenolic ppm measure is meaningful, it should always be considered with the big picture in mind.

Laphroaig is barreled at 125-proof, or 63.5 percent alcohol by volume — the same entry point as most bourbons.

Both brands utilize primarily used bourbon barrels, with sherry casks mixed into the maturation equation. In addition, Ardbeg uses French Oak barrels for some expressions. Laphroaig has a Quarter Cask selection, but it doesn’t describe ¼ of a bourbon barrel, but rather a quarter the size of a sherry butt, which is much larger.

Both brands receive nuanced briny sea notes from the proximity of the resting barrels to the crashing waves of the Atlantic Ocean.

While we’re here, we might as well look at the rest of the lineup. In addition to Laphroaig 10, there are several products that peat freaks should keep an eye out for. Below are some of the most available expressions. Laphroaig Aged 10 Years will cost you about $62 for a 750mL bottle at 86-proof, or 43 percent ABV.

Today, Ardbeg is produced by the Paris-based conglomerate Louis Vuitton Moët Hennessy, or LVMH. Ardbeg Ten Years Old will cost you about $57 for a 750mL bottle at 92-proof, or 46 percent ABV.

Description — In the glass, Laphroaig 10 is chestnut in color, with a straw-gold hue and moderate legs at 86 proof, or 43 percent alcohol by volume.

Nose — The nose is all medicinal creosote smoke. Secondary aromas include a pine and cedarwood notes, cinnamon, clove and baking spices, mint and tobacco.

Description — In the glass, Ardbeg Ten is pale gold in color with a light yellow hue. It has healthy legs at 92-proof, or 46 percent ABV.

If you’ve been introduced to bourbon, rye and scotch basics and want an introduction to more intense types of whisky, these two peated Islays are the perfect ticket. Wide availability means liquor stores across the country — including one near you  — will stock both brands, making it the perfect blind tasting and a gateway to the smoky flavor of peated malt whisky.

Other Islay Whiskies to Try

Because we have an Islay-on-Islay matchup, we should mention some of the other contenders. Once you’ve learned to appreciate the peat-forward flavor of Ardbeg and Laphroaig, compare them to some of the other Islay malts. 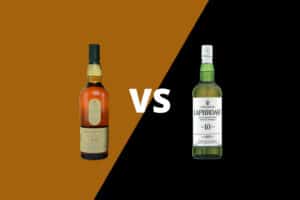