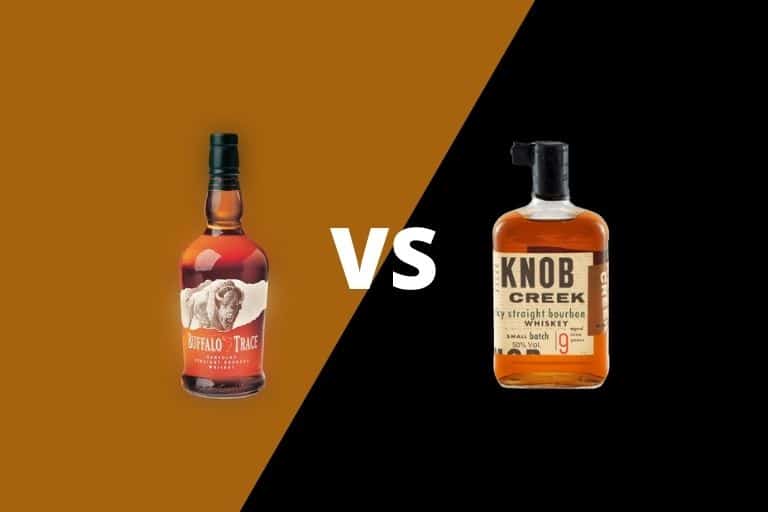 In the showdown between Knob Creek and Buffalo Trace, the real winner is anyone calling themselves a bourbon fan!

Each is an excellent bourbon. You may already be acquainted with the flavor profiles of these two popular brands. But whether you consider yourself a bourbon geek, whiskey snob, or are just starting out your journey in distilled spirits, learning more about their unique product attributes will help you appreciate the unique flavor profiles each brings to the table.

While it might be unfair to pit standard and premium category bourbons against one another, we can assure you that despite having different price points, each offers an incredible amount of return on investment – both in terms of flavor and value!

We’ve got a lot to discuss. So grab a glass and a barstool, and let’s get right to it.

The Knob Creek brand is named after the childhood home of Abraham Lincoln near Athertonville, Kentucky.

Knob Creek is often considered one of the first ‘small batch bourbons.’ In fact, Booker Noe — the late, longtime Master Distiller for Jim Beam Brands — is given credit for coining the term ‘small batch.’ It was first released in 1992 as part of the Jim Beam ‘Small Batch Bourbon Collection’ — along with Baker’s, Booker’s and Basil Hayden’s bourbon brands.

Buffalo Trace was also launched in the 1990s. Its name corresponds to the historic distillery in Frankfurt, Kentucky. When the Sazerac Company purchased the George T. Stagg distillery, they changed the name of the site to the Buffalo Trace Distillery after a nearby point on the banks of the Kentucky River where buffalo herds crossed.

Buffalo Trace is produced by the Sazerac company, based in New Orleans, Louisiana. It is a large producer focused on American whiskey.

Buffalo Trace Bourbon is a popular standard segment offering in terms of volume sales. The Sazerac Company also offers many other brands produced at the Buffalo Trace Distillery, including Ancient Age Bourbon — a value segment bourbon — Sazerac Rye Whiskey in the standard segment and Eagle Rare, George T. Stagg, W.L. Weller and Blanton’s whiskeys representing the premium segment. Sazerac also includes several super-premium and above brands, including what might be considered the holy grail of the premiumization trend: the Van Winkle line of bourbon offerings.

Knob Creek is produced by Beam Suntory, which produces some of the most well-respected whiskeys from Japan, Canada, Scotland and the United States. Beam Suntory is currently based in Chicago, Illinois, with plans to relocate headquarters to New York City, while Suntory is based in Osaka, Japan. Beam Suntory is the third-largest international spirits producer.

Knob Creek is part of the Jim Beam brands Small Batch Collection series. Other Small Batch Collection brands include Basil Hayden’s, Baker’s, Booker’s and Maker’s Mark bourbons. Suntory’s Japanese brands include the Suntory yellow-label ‘turtle shell’ bottling — one of the highest-volume brands in Asia — and the internationally renowned Yamazaki, Hakushu and Hibiki brands. Scotch brands include Laphroaig, Bowmore and Teacher’s, and the stable includes an impressive array of Canadian and Irish whiskey brands.

Let’s take a look at the mash bills — or list of grain ingredients — for these two brands. Each is a Bourbon whiskey required by law to contain at least 51 percent corn in the mash bill.

Buffalo Trace does not disclose the proportion of grains used to make its bourbon. While we know it contains at least 51 percent corn, the remaining secondary grain proportions are unknown. From its taste, we can infer that it contains a considerable proportion of rye grain. And malted barley is used in the majority of Kentucky bourbons out of a sense of tradition.

Malted barley was, in many ways, the original whiskey grain. It was essential for brewing beer because natural enzymes in the barley germ play an essential role in the saccharification process. This process turns complex carbohydrate chains in the grains into sugar molecules that yeast find delicious. Without the contribution of these enzymes, the yeast wouldn’t be able to metabolize the liquid and beer makers would be left with a grain porridge slurry with zero percent alcohol content.

Today, American whiskey makers can use modern lab-produced enzymes to promote saccharification. As a result, some producers use mash bills that contain zero malted barley. But these products remain in the minority, with most Kentucky distillers sticking to a tradition of using a proportion of malted barley in the mash bill, which not only helps boost the pre-fermentation BRIX reading but also contributes those delicate nutty flavor notes associated with malted barley in the final product.

Both are Knob Creek and Buffalo Trace are labeled as straight bourbons.

When comparing the maturation techniques of these two brands, the most exciting news angle might be that big, fat, bold-faced number ‘9’ on the label of Knob Creek. Not only is it impressive for a brand with the sales volume of Knob Creek to offer an age statement but — at 9 years old — that statement is an impressive feat in the bourbon world.

Age statements are regulated by the TTB. To carry an age statement on the label, the distiller must certify that each barrel in the batch is matured for the number of years listed. So each bottle of Knob Creek with that big beautiful nine on the label contains the juice from barrels aged for no less than nine years — with many barrels in the blend aged for much longer to lend those dark and dusky notes to the final product.

By comparison, Buffalo Trace is a NAS — or Non-Age Statement — bourbon. Being labeled as a straight bourbon tells us it has been matured at least two years, and it would be reasonable to assume the liquid inside each bottle is at least four years old.

Longtime bourbon aficionados will recall a dark time in Knob Creek’s history when that number ‘9’ went away. From 2016 to 2019, bottles of Knob Creek were released that did not include an age statement. Due to the sustained demand caused by the bourbon boom of the 2010s, the production team simply couldn’t keep pace. Master Distiller Booker Noe and his team reluctantly removed the ‘9’ from the label while doing their best to maintain taste and quality standards for each batch.

This serves as a testament to the choreography required by distillers, warehouse managers and distribution teams as they practice their craft. In few other professions are producers asked to forecast demand a decade or more in the future. Whiskey makers must estimate future demand based on current customer trends — which often change drastically from decade to decade.

Mashing, fermenting and distilling the liquid is difficult enough, but consider the logistics and costs that go into maturing whiskey. Massive warehouses must be built and maintained, and each barrel diligently tracked for tax and liability reasons. Inside the wooden rickhouses, barrel-proof spirits housed inside of wooden casks remain highly flammable. The sheer weight — a single barrel can weigh over 500 pounds — can cause centuries-old warehouses to collapse. Each year, spirit is lost to the angels’ share as the liquid inside each barrel evaporates. There’s even the odd barrel heist – as our friends at Sazerac can attest. All the while, no revenues are collected until the contents are diluted, bottled and sold to customers.

When you add up all these factors, it’s a wonder whiskey producers can offer some of these brands for such a low cost!

Knob Creek is produced at the Jim Beam Distillery in Clermont, Kentucky, near the Kentucky River.

Both distilleries take advantage of Kentucky’s plentiful limestone-filtered groundwater during the production of their whiskeys.

Customers rightly connect the term ‘small batch’ with quality. But we should mention that it is not a term that is regulated by the U.S. Tobacco and Alcohol Tax and Trade Bureau – or TTB. There is no minimum or maximum threshold for the number of barrels dumped to blend a particular whiskey batch. Products with one barrel and products with 2,000 barrels in any batch could choose to place the term ‘small batch’ on the label.

Please note: This is not a comment on the batch sizes of Knob Creek in particular, but rather one thing the whiskey consumer might consider when comparing whiskey bottles in the liquor aisle.

You can expect a 750mL bottle of Knob Creek to cost about $35, and it is bottled at 100-proof, or 50 percent ABV. Its price puts it firmly in the premium segment.

Again, we should note that the differences in price, barrel aging, and proof point make this particular side-by-side comparison tricky.

Appearance: In the glass, Buffalo Trace has a deep amber color, with nice legs at 90-proof.

These are two fantastic bourbons. By putting them in a side-by-side tasting flight, you can learn a lot about the history of the bourbon category.

Buffalo Trace is a great everyday bourbon. It is made with incredible attention to detail and is offered at a price point that is well below its overall value. It is versatile enough to be enjoyed neat, or on the rocks, but is affordable enough to be considered as an ingredient in high-end craft cocktails. It is well respected as a permanent staple on any whiskey nerd’s bar.

Knob Creek is also a remarkable bourbon made using a small batch craft approach to production. Its nine year age statement makes it the perfect bourbon for those new to the category who want to experience the impact that barrel char and time have on the finished product. If you’ve ever wondered how whiskey writers get the descriptors of ‘tobacco and leather notes,’ here’s the opportunity to see for yourself. At 100-proof, it can serve as a full-flavored introduction to the premium category and holds its flavor over ice. 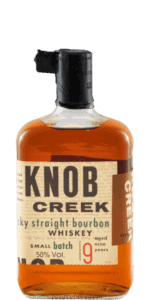