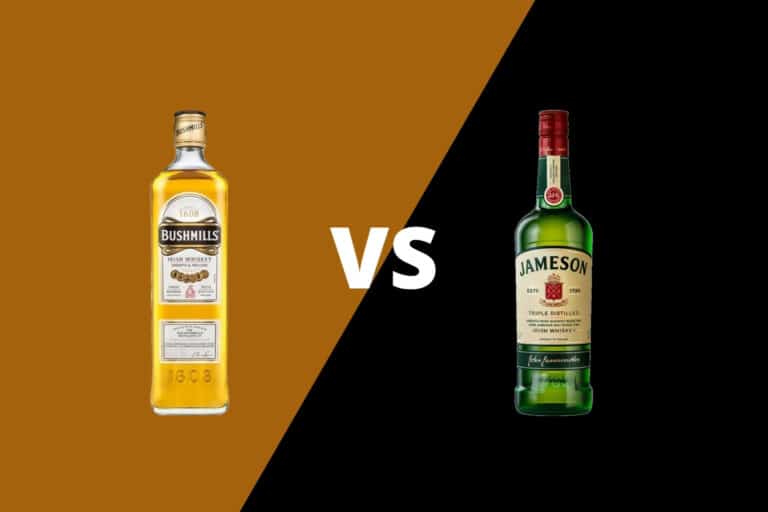 Not a single apostrophe anywhere to be seen.

Okay, that’s a bit of an exaggeration. But it’s a bit of a novelty to find two brands — Bushmills and Jameson — that do not utilize the possessive.

That’s not the only unique aspect of this matchup. Today, we pit two of Irelands biggest distilleries, which represent some of the best-selling Irish whiskey in the category, against each other.

If you’re looking for the perfect product for an Irish whiskey cocktail or a shot call at your favorite bar, you might look at these two products and wonder which is the more authentic whiskey. Luckily for you, it’s a choice where you can’t’ go wrong.

Ready for a taste of whiskey? Let’s dive in.

We’ve covered the origins of American whiskey and the scotch that preceded it. But never have we covered a brand history that goes back as far as Bushmills.

In that year, John Smith was released by Powhattan in Virginia. Quebec was founded by Samuel de Champlain. And a royal license was granted by King James II to local landowner Sir Thomas Phillips in Bushmills, County Antrim, Ireland, to distill aquavite and usquebaugh — the local Irish Gaelic word that was eventually anglicized to the modern ‘whiskey.’

While that historic site may not have been the exact site where the Old Bushmills Distillery stands today, it’s an impressive origin story and a nod to one of the oldest distilling traditions globally — one that represents arguably the oldest licensed whiskey distillery in Ireland — and possibly Europe.

It’s a narrative that the modern Bushmills brand has leaned heavily into in marketing campaigns.

Before Bourbon. Before Kentucky. Before America. There was Bushmills.

Has a nice ring to it, yeah?

Sure, the Bushmills Old Distillery Company was created by Hugh Anderson in 1784 — after the Treaty of Paris ended the American Revolutionary War, thank-you-very-much. And the distillery closed for several years, and a fire caused the site to be totally destroyed and rebuilt. But that doesn’t take away from the fact that the Bushmills site is one of the oldest production sites in current production.

In comparison, John Jameson established his distillery in Dublin in 1780. By 1805, it was the No. 1 selling Irish whiskey — when Irish whiskey was the top-selling type of whiskey globally.

During the 20th century, the Irish whiskey category took a tumble for a combination of factors — Irish independence and American Prohibition being among them.

Both Jameson and Bushmills remained bulwarks of the category and helped Irish whiskey claw its way back up from the bottom. Since a low point in the 1970s, both brands have been central to a rejuvenation that has benefited from a renewed interest in whiskey in general, and Irish whiskey in particular.

Distillers and producers use the term ‘mash bill’ to describe the list of grain ingredients used during the fermentation phase to create an alcoholic beer that is then distilled to make whiskey. By regulation, all Irish whiskey must be made from 100 percent grain.

The regulations — the Irish Whiskey Act of 1980 — were passed by the Irish legislature, or Oireachtas. They were agreed upon by the European Union.

But as the messy breakup continues between the United Kingdom, which includes Northern Ireland, and the European Union, which includes the Republic of Ireland, a fault line has been the only land border between the two. As of writing, few beverage industry analysts expect that to change anytime soon. But Brexit is testing the delicate balance that has been the status quo for decades.

The term ‘Irish Whiskey’ is used to describe any product made on the Island of Ireland. This includes products made in the independent Republic of Ireland and the country of Northern Ireland, which is part of the United Kingdom.

A wise person once said, ‘never mix alcohol and politics.’ And when you’re talking about something as volatile as the troubles, that old proverb holds even more weight. So, we’re not touching that particular question.

But it does bring up a valid point now that Brexit has become a reality.

Regulations require whiskeys distilled in Ireland to be of one of the following categories: pot still whiskey, grain whiskey or malt whiskey. Alternately, producers can blend two or more of the above categories to produce blended whiskey.

Let’s look at how these component whiskeys are made to learn more about the juice inside the bottle.

Grain whiskey is produced from a mash of any combination of cereal grains. If it is made at one distillery, it can be called a single grain whiskey. The prominent grain used to produce blended whiskey is usually corn or wheat. For large producers, the use of the primary grain during fermentation is tied closely to the commodity grain market, and the popularity of wheat versus corn has oscillated back and forth over the centuries.

As an aside, many of the most well-known bourbon products like Maker’s Mark, Jim Beam and Buffalo Trace would be labeled as ‘Grain Whiskey’ if their entire operations were uprooted and placed in Ireland or Scotland and maintained all other production characteristics. However, because the climate and water are different, the resulting whiskey would likely taste differently. We share this fact to help the reader understand that although higher proportions of grain component whiskey in a blend are often used to denote lower quality, producers can make excellent grain whiskey when they choose.

Malt whiskey is produced using a mash of 100 percent malted barley using a copper pot still — a more traditional and costly method of producing whiskey that allows distillers to carry more nuanced flavor congeners through the distillation process into the finished product. To be labeled as a single malt whiskey, the product must be made at a single distillery.

Bushmills offers a wide variety of single malt whiskeys in their lineup, including Bushmills 10 years, Bushmills 16 years and Bushmills 21 years. Their premium Causeway Collection includes whiskeys that are aged longer and finished or aged exclusively in specialty casks like ex-Sauternes and ex-Marsala wine casks.

Common lore ties the invention of the pot still method to a royal whiskey tax during the 18th century. And although some historians dispute this narrative, it does add a bit of drama to its origin.

A blended Irish whiskey describes any product that combines two or more of the categories above.

Jameson is a blended whiskey that combines pot still and grain whiskeys. Many of its higher-end products contain higher proportions of pot still whiskey in the blend.

Bushmills Original is a blended whiskey that is a combination of malt and grain whiskeys. In this way, it resembles many blended scotch whiskeys.

So while both Jameson and Bushmills represent the same category — blended Irish whiskey — the components in those blends represent two totally different types of whiskey.

Bushmills is operated by Jose Cuervo, a Mexican-based company owned by the Beckmann family.  Before November 2014, the Bushmills brand was owned by London-based Diageo. But a swap deal gave the Bushmills brand to Cuervo in exchange for Cuervo’s half of the Don Julio Tequila brand, which was equally co-operated before the swap.

Bushmills Blended Irish Whisky is available for about $26 for a 750 mL bottle at 80-proof or 40-percent alcohol by volume.

Jameson Blended Irish Whiskey is available for about $28 for a 750mL bottle at 80-proof or 40 percent ABV.

Description: In the glass, Bushmills Original has a medium yellow hue, with the color of deep color. It has slight legs at 80-proof.

It comes down to unmalted barley.

If you would like to taste the leathery characteristic of Irish pure pot or the clean malty flavor of Irish single malt. These two Irish bottles offer a lot of depth between them.

Each is a great whiskey. Jameson Irish Whiskey’s signature smooth finish has helped it become a favorite shot call for generations of newcomers to the category.

We especially found Bushmills Original Blend to be an exceptionally smooth whiskey at its price point, with a much higher proportion of malt than comparable blended scotch whiskeys in the price range. As a result, it is an excellent drink for people who enjoy scotch neat — try a splash of water to open up the nose and release those floral flavors.

This is a perfect side-by-side comparison for those wanting to see whether they can find the nuanced differences malted and unmalted barley have on the resulting flavor profiles. 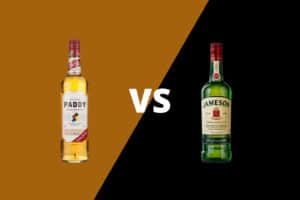 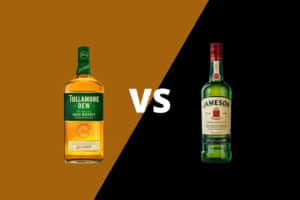