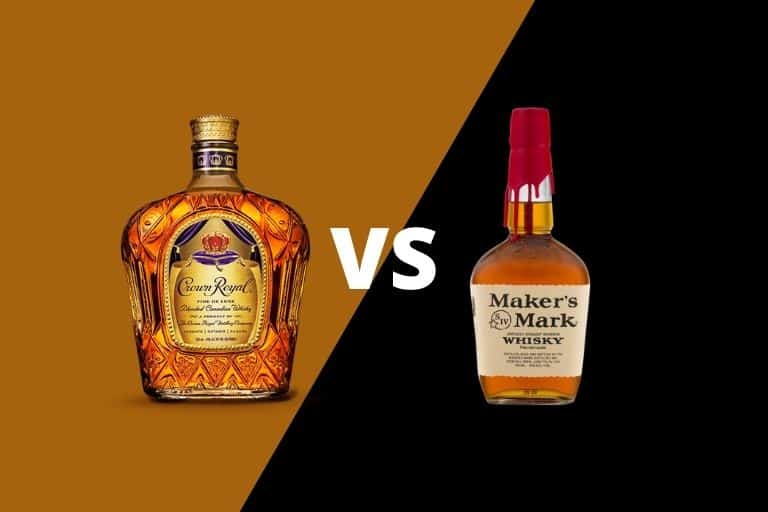 If you are a well-seasoned bourbon or Canadian whisky aficionado, you may be wondering, ‘Why does this post exist?’

These two brands might have more differences than they have similarities. But the one thing they have in common is the price point.

So, if you’re just starting out your journey in distilled spirits and whiskey — and, remember, we were all there at one point — you may be standing in the aisle of your local whiskey shop, trying to figure out which is the better buy.

Well, don’t worry — we’ve got your back.

In this post, we’ll offer a complete comparison to help you decipher the pros and cons of each of these world-renowned brands.

Before we begin, a brief editor’s note: Mind the ‘e.’

You’re not crazy. Throughout this article, you may notice some inconsistencies in the spelling of the word whisk(e)y. We’ve tried to keep to the American spelling ‘whiskey’ and the Canadian spelling ‘whisky’ when possible. This helps to emphasize the vital fact these two products are from entirely separate categories — something to keep in mind when comparing these two spirits.

God save the King.

The Crown Royal brand is a direct result of a visit to Canada by King George VI and Queen Elizabeth in 1939 — the first trip to the Great North by a reigning monarch. To greet the king, queen and royal entourage, one whisky maker decided to create the most extraordinary whisky possible.

Samuel Bronfman was the president of Seagram. Today, Seagram may be known for soda pop brands, but during the 20th century it was also the world’s largest distilled spirits producer and a global drinks empire. Bronfman was an interesting character whose background somewhat resembled the fictional Meyer Wolfsheim from the Great Gatsby. During American Prohibition, he made a fortune by distilling spirits in Montreal, Quebec — where production was legal — that mysteriously made their way through the Great Lakes into American cities like Chicago, Detroit and New York. He was also an extremely successful businessman in charge of a fully conglomerated operation that included early movies and entertainment and American oil interests, among other endeavors.

As one of the wealthiest men in Canada, he saw that the royal welcome George VI and Elizabeth received was fit for royalty. To commemorate the event, Seagram’s released a blended Canadian whisky that combined the best barrels in the company’s many warehouses. Crown Royal was the result. The royals took 10 cases with them on their train tour across the continent.

Bill Samuels, Sr., purchased a distillery in Loretto, Kentucky, to make bourbon in 1954. Along with his wife, Margie, the family packaged their bourbon in the family kitchen and used their stovetop for the signature red wax seal. Bill came up with the now-famous wheated recipe by holding a bread bake-off. The family continued after Bill Sr. retired, with son Bill Samuels, Jr., and grandson Rob Samuels steering the brand to this day.

Y’know… now that we think about it… Crown Royal’s story reads like ‘The Crown,’ while Maker’s is reminiscent of an episode of ‘The Andy Griffith Show’…

Maker’s Mark is produced by Beam Suntory, considered the third-largest distilled spirits producer in the world. Beam Suntory is known for producing Jim Beam white label — the No. 1 selling Bourbon whiskey in the world and other fan favorites like Knob Creek.

Crown Royal is produced by Diageo, the world’s largest distilled spirits producer. If you think the 1.5 million barrels of whisky maturing on the Diageo Crown Royal campus in Manitoba are impressive, just consider the logistics required to produce Johnnie Walker — the No. 1 whisky in the world by volume sales — also owned by Diageo.

Bear with us. This section is going to get a little weird.

A mash bill comparison between bourbons is a relatively straightforward endeavor. The mashbill or grain bill is the list of grain ingredients used to produce a whiskey. For bourbon, the rules make it straightforward — you ferment beer, you distill the beer, you barrel the clear distillate, dump the barrels after a few years then bottle the matured spirit.

Crown Royal uses five different mash bill recipes to make their various component whiskies. These are broken up into grain whisky and ‘flavouring’ whisky. Grain whiskies are traditionally made primarily of corn (or maize), wheat and/or malted barley, while flavouring whiskies are made predominantly with spicy rye grain and may resemble what we think of as a bourbon or rye whiskey mash bill. But the proportions for each of the five will vary, as will their distillation and maturation techniques.

For each batch of Crown Royal, the blending team must taste through hundreds — or thousands — of barrels and blend together a combination that shows consistency from batch to batch. As a result of this process, Crown Royal bottled in 2010 should ideally taste nearly identical to a bottle from 2020.

Canadian whisky can also blend up to two percent wine or liqueur into the product, which is strictly forbidden in bourbon production. And any Canadian whisky that has any proportion of rye grain can be called ‘Rye,’ while American Rye whiskey must contain at least 51 percent rye grain in the mash bill. These differences in style are codified in both U.S. and Canadian law. As a result, Canadian whisky makers couldn’t even use the word ‘bourbon’ on the label if they tried — and they have — but they can call a product that is 75 percent corn ‘Rye’ which would be illegal in the U.S.

Maker’s Mark, on the other hand, is a Bourbon whiskey, which requires the mash bill to contain 51 percent corn by law. But while most traditional bourbon mashbills use rye as the flavoring grain, Maker’s Mark uses soft red winter wheat, which gives the resulting product more of a rounded mouthfeel, softer character and mellow flavor.

Crown Royal has 1.5 million barrels of whisky aging on site. That’s a lot of booze.

To illustrate how much hooch is hanging out in Crown Royal’s 51 maturation warehouses, I did some back-of-the-napkin math to estimate the angel’s share — the amount of whiskey lost from the barrel each year due to evaporation.

As with Scotch production, Canadian whiskey must be aged for no less than three years. And — like their counterparts in Scotland — Canadian distillers may utilize any combination of charred, uncharred, toasted, new or used white oak barrels to mature their whisky.

One difference between the Canadian whisky and American whiskey traditions is the difference in warehouse preference. Canadians tend to prefer the dunnage-style warehouses that are in line with the Scotch whisky-making process. The dunnage-style warehouse is a one-story structure, often with a stone or wood foundation built underground. The Kentucky rackhouse, or rickhouse, by contrast, is a multi-storied wooden structure built above ground.

The dunnage-style warehouse, combined with a cooler, more humid climate — like that of Manitoba or Scotland — often leads to an angel’s share composition that leaves the barrel lower in proof when dumped than when it was filled. The hot and humid Kentucky summers, by contrast, combined with multi-storied rickhouses mean bourbon barrels are often higher proof when they are poured than when they were filled.

While these traditions are generally followed in the industry, they are not codified by law. Some distillers choose to break that tradition in favor of innovation.

Maker’s Mark goes against the grain by utilizing both rack and dunnage style maturation warehouses. As a result, Crown Royal and Maker’s Mark have the dunnage-style warehouse in common in the production of their world-renowned whiskeys.

As a Straight bourbon whiskey, Maker’s Mark has been matured in new American charred oak barrels for at least two years.

Crown Royal is distilled at the Crown Royal Distillery in Gimli, Manitoba, near Lake Winnipeg. To meet the demands of a globally recognized brand, the facility runs 24 hours a day, 7 days a week.

The distillery has 12 different distillation columns to create an extensive range of flavors for the various component whiskies.

The modern reflux column stills offer an incredible level of control. By finetuning temperatures and the addition of steam during various points of the run, the same still can offer different outputs when it comes to things like congener content and exit-proof. By utilizing 12 stills of various diameters with different numbers of plates, an incredible amount of spirit variety is possible off the still. Combining these spirits with different types of barrel and cask maturation, the sheer number of component whiskeys available to the master blender and the blending team offers an arsenal of flavor.

A 750mL, 80-proof bottle of Crown Royal will cost you about $29. Don’t forget about that cool velvet purple bag included in the price. A replica of the original cut glass decanters and velvet purple bags with actual gold stitching as designed for George VI are recreated for each 750mL bottle sold today.

A 750mL, 90-proof bottle of Maker’s Mark will cost you about $30. It also comes in a unique, easily recognizable bottle topped with an identifiable red wax seal.

Description: In the glass, Maker’s Mark has an amber-honey complexion. Its 90-proof strength is evident by the ‘legs’ that run down the glass after the liquid is swirled around a snifter.

Both whiskeys are great for a bar shot call — the mellow profiles from Maker’s wheated mash bill and from Crown Royal’s blend of smooth whiskies make them ideal as a chilled shot of whiskey.

They both make great cocktails and can be enjoyed neat, iced or over the rocks. So, when comparing these two well-known brands — your tongue is the real winner. 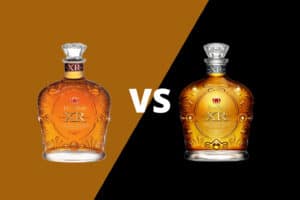 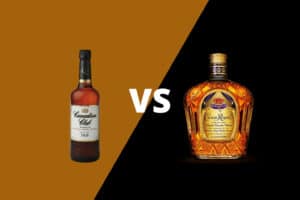