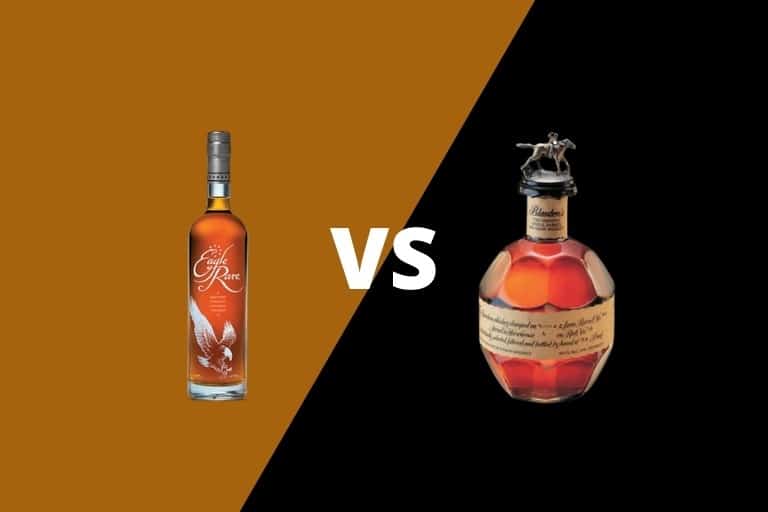 Today, we look at two elusive bottles of bourbon that are much sought after by those in the know.

The well-versed bourbon enthusiast is on the constant lookout, and finding either of these bottles at the suggested retail price on the shelf of your local liquor store is a righteous score.

Although they may not have yet gained the provenance of Pappy Van Winkle, Blanton’s Single Barrel and Eagle Rare 10-Year bourbons are available in limited quality due to surging demands and commitment by parent company Sazerac not to diminish quality or raise wholesale prices.

This matchup is a story that picks up in the 1970s and 80s — a perilous time in bourbon country. In fact, it was an elephant graveyard for American whiskey makers, second only to Prohibition in its destruction.

The distilled spirits industry is a tricky business. Producers must anticipate demand 4 to 10 years in the future — even longer for some brands. While the whiskey rests in new charred oak barrels to mature, a lot can happen in terms of consumer demand.

From the time Prohibition ended in 1933, through the return of the Greatest Generation from World War II and the economic boom of the post-war years, sales of the overall category whiskey were on a steady rise. But during the late 1960s and 1970s, men and women of the Baby Boomer generation were coming of age. It was the turbulent time of the ‘flower power’ revolution, and following the summer of love, the coming-of-age adults began to seek new experiences — mind-altering and otherwise — and reject the habits of their parents.

This trend extended to drinking habits as well.

The Baby Boomers shied away from matured spirits like bourbon, blended whiskey, rye whiskey, Canadian whisky and cognac and moved to unaged clear spirits like gin and vodka.

The Harvey Wallbanger was in. The classic Manhattan was out.

During the 1970s, distiller Charlie Beam at Seagram’s had an idea for a new bourbon brand. As demand declined, barrel inventories began to accumulate and mature. To take advantage of the older barrels, the Eagle Rare brand was created and launched with a 10-year age statement and bottled at 101 proof-point — a nod to Wild Turkey.

It was to be one of the last major bourbon brand launches for about a decade.

The bourbon category continued to take its licks through the 80s — in the United States, that is. But business was booming in Japan. The 80s were a wild time as the country rapidly modernized, and investments made after WWII began to pay off. As Japan joined the ranks of industrial powerhouses and took its place as the world’s second-largest economy, a new business class began to enjoy the bold American-style bourbon.

Today, many bourbon geeks might not realize we have the extraordinary relationship between the Japanese and American economies to thank for the modern concept of single barrel bourbon.

In 1983, Ferdie Falk and Bob Baranaskas were two successful American businessmen who decided to enter the whiskey business. They acquired the Ancient Age bourbon brand and the Albert B. Blanton Distillery — now known as Buffalo Trace — and created Age International.

By the 1980s, the Kyoto-based Takara Shuzo Company was a diversified organization with interests in biomedical and other services. But it had its start in sake and rice wine and continued to import alcoholic beverages for consumption in the home market. Takara Shuzo bought increasing stakes in the company to secure whiskey stock for export to Japan. The Blanton’s Single Barrel concept was created by distiller Elmer T. Lee to offer a unique from-the-barrel experience for Japanese bourbon fanatics. It was also released in the United States.

Eventually, Takara Shuzo took complete control of Age International and sold the distillery to Sazerac, who had also purchased the Eagle Rare and several other brands during the dissolution of Seagram’s spirits division. Today, Takara Shuzo owns the Ancient Age and Blanton’s brands, but they are distilled at Buffalo Trace Distillery and distributed in the United States by Sazerac.

Buffalo Trace does not disclose the mash bills of their whiskeys, but some sources have reported that Blanton’s has a slightly higher rye content than Eagle Rare.

Both Eagle Rare and Blanton’s Bourbon are produced at the Buffalo Trace Distillery in Frankfurt, Kentucky.

Nearly all brands distilled at Buffalo Trace — including the namesake Buffalo Trace brand, W.L. Weller, Sazerac Rye, George T. Stagg, E.H. Taylor and, of course, the Pappy Van Winkle line — are on allocation, which means that distributors and state buyers are limited in the number of cases they are allowed to order. In control states, where prices are pegged to the manufacturer’s suggested retail price – or MSRP – inventories evaporate as word reaches message boards that these brands are on shelves. In non-control states, where retailers control the price, bottles of these brands often sell for two, three, four times the MSRP — and often for much more ridiculous prices.

This is actually a good thing because customers have been drinking more than the original sales projections suggested. And parent company Sazerac should be commended for not lowering quality standards or increasing the asking wholesale price to take advantage of the situation.

Since 2018, the Buffalo Trace Distillery has been in the midst of a $1.2 billion upgrade to increase the supply-side shortages for these brands. New climate-controlled barrel warehouses have come online, as have new cookers and fermenters. A new $50 million bottling operation has been built to increase capacity.

As barrels made with new equipment hit shelves over the next decade, it will be interesting to compare vintage lots to the new bottles to see if there have been any noticeable changes in the flavor profile. Expanding operations with new equipment is a notoriously imperfect science. Distillers and quality assurance personnel have been confounded for centuries by how new equipment — even built to exact specifications — create subtly different flavors for the products being created.

Distillation is as much an art form as it is a science and the orneriness of new equipment on the production line is just one of the many aspects that stress that point.

By U.S. Law, all bourbons are matured in new charred American oak barrels. Straight bourbons have been aged for at least two years, and products under four years of age must carry an age statement.

A big difference between these two brands is the 10-year age statement for Eagle Rare and the ‘Single Barrel’ designation from Blanton’s. Each of these is a quality claim regulated by the U.S. Alcohol and Tobacco Tax and Trade Bureau. For this reason, we know the youngest barrel used in each batch of Eagle Rare Bourbon has been matured for no less than 10 years — and many barrels are even older. And we know that each bottle of Blanton’s comes from a single barrel of maturing bourbon, dumped, filtered and diluted before bottling at about 93-proof.

Both the 10-year age statement and the single barrel designations are well-respected within the world of bourbon aficionados, helping to explain the high esteem placed on these two brands.

Buffalo Trace’s maturation facilities use steam heat and insulated warehouses to control the climate for their aging barrels, a relatively novel approach in Kentucky bourbon country. Most of the rickhouses across the state are multistoried wooden and tin-plated buildings that are non-climate controlled. These traditional structures expose barrels to the cold Kentucky winters and hot, humid summers.

The spirit inside the barrel interacts with the char and red layer of the wooden staves when the liquid expands during the hot months and contracts during the cold periods. By using climate-controlled warehouses, the blending team can expect a more even-keel maturation process. Arguably, this approach makes for more balanced barrels as they age into the well-matured range — eight years or more. Extra mature barrels can be ‘over matured’ or ‘over-oaked,’ meaning the wood has taken over the flavor. So, using climate-controlled rackhouses is one way to build out quality inventory for the 10-, 12-, 17-year and even older age statements that grace the label of many brands produced at the Buffalo Trace facility.

These are two high-quality bourbons for their respective price range — when you can find them.

But to write this post, we had to order a bottle of Eagle Rare for $130 plus shipping and handling. And to compile our Blanton’s tasting notes, we had to go to a high-end whiskey club to pull drams from the bottle behind the bar. The secret is out on these two stellar brands. So, if you see them at their MSRP, it will be helpful to realize just how prized a trophy you’ve found.

Description: In the glass, Blanton’s has a dark-brown, tawny hue and a chestnut color. Its legs are viscous and pronounced at 93-proof.

Description: Gorgeous legs down the glass at 90-proof that belay a pleasant mouthfeel. 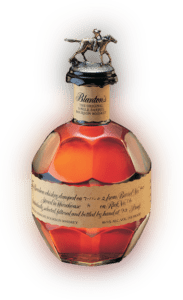