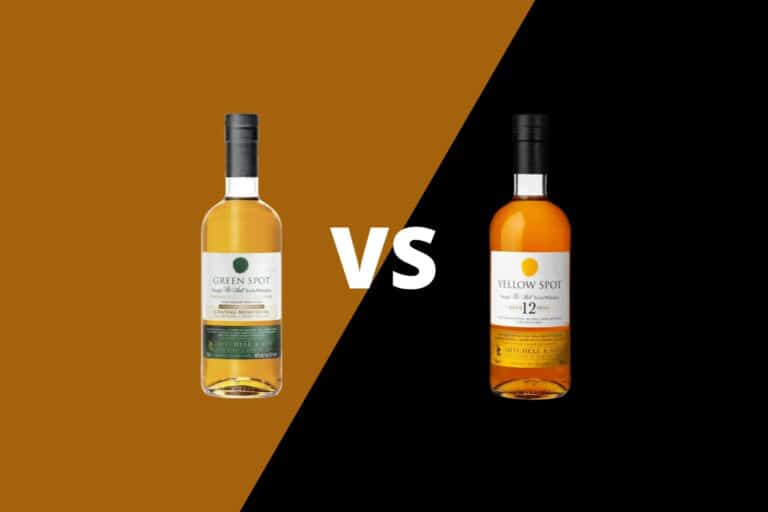 It was a favorite of Irish writer James Joyce — among other famous Irish bards — and continues to be a favorite of whiskey enthusiasts across the globe. But the beloved brands Green Spot and Yellow Spot — along with the single pot still Irish whiskey sub-category they represent — almost blinked out of existence at the end of the 20th century.

Read on to learn more about this gem of a dram, how it’s made and the incredible history behind the one-of-a-kind Spot brand family.

The story of Green Spot and its stablemate Yellow Spot reflects Irish whiskey’s rollercoaster ride on the global market over the past few centuries.

We will start our story in the 18th century when a UK tax imposed in 1785 on the use of malted barley caused distillers to reimagine the ingredients used to make their beloved whiskey. According to this narrative, patriots avoided the king’s tax by only using a portion of malted barley and filling the rest of the mash bill with unmalted — or green — barley. While some whiskey historians cast doubt on this origin story as oversimplistic, it provides us with a useful start to our timeline.

In 1805, the Mitchell family of Dublin opened a bakery shop on Grafton Street. After eight decades of serving biscuits and bread, the family turned to wine importing and whiskey bonding in 1887. They became one of the many whiskey bonding agents who matured casks for large global distillers like Jameson, whose massive Bow Street Distillery was less than two miles from Mitchell & Son’s subterranean cask cellar.

At the time, Irish whiskey was the dominant form of whiskey on the global market. Single malt scotch was a novelty, enjoyed in the British Isles but underappreciated elsewhere. Blended scotch was frowned upon due to the use of column stills. And North American whiskey’s bold rye-forward flavor puzzled the European palate.

We’ll look at why wine importers like Mitchell & Son became an integral part of this supply chain in the maturation section. But suffice to say, these bonded warehouses helped these large distilleries find cask space for the millions of proof gallons they were pumping out each year.

Irish distillers consolidated as a means of last resort under the imaginative name Irish Distillers in the mid-20th century. The names of brands lost during this time are too numerous to share, but it included Green Spot stable mates Yellow, Red and Blue Spot. Green Spot also lost its age statement during this time.

Irish Distillers mounted an unlikely comeback beginning in the 1980s with the Jameson brand with help from a marketing campaign revolving around the Irish coffee cocktail. In the background, Green Spot clung to viability, a niche product produced in such small amounts that its air of exclusivity became a lucrative selling point as the whiskey renaissance took hold.

Today, Green Spot is a unique tasting experience sought after by whiskey aficionados, and the return of Yellow Spot, Red Spot and Blue Spot round out the assortment for those looking to taste little-known flavors of the past.

Single pot still is a particular style of whiskey native to the island of Ireland and unique in its approach. According to Irish and European Union regulations, a product must be fermented from a mash of at least 30 percent barley and 30 percent unmalted barley to be labeled as a pot still whiskey. Up to 5 percent of the remainder can include other cereal grains, like oats, rye and wheat.

We should note a push to update these regulations to allow up to 30 percent of ‘other’ grains like wheat and oats is currently underway.

Triple distillation is a complicated method that vexes the average American bourbon distiller. Using a copper pot, the wort is first distilled to about 20 percent alcohol by volume. Then, the distillate is combined with foreshots (i.e., heads) and feints (i.e., tails) from previous distillations before the second still brings the strength higher. The collected spirit from the second run is then diluted and run through a third still to get new make spirit at about 160-proof.

This sounds easy, but there’s a lot more that goes into this process. To learn more — including how this process works on a column still — check out a more detailed explanation in Jameson vs. Crown Royal.

While pot still Irish whiskey is traditionally triple distilled in a copper pot still, regulations do not exclude double distillation or the use of column stills. Single pot still whiskeys must be produced at a single distillery.

Here, the story revolves around the types of wine casks the Mitchell & Son shopkeepers had in their warehouse.

Before the repeal of American Prohibition in 1933, bourbon and American rye producers were not required to mature whiskey in new American charred oak barrels. In turn, distillers in Ireland and Scotland didn’t have access to the vast inventory of used bourbon barrels enjoyed today on the secondary market. You can imagine how different the process for procuring casks for use in maturing whiskey might have been as a result.

When Mitchell & Son’s Dublin shop began importing and purveying wines in 1887, Ireland was the whiskey capital of the globe. In worldwide sales, quality perception and volume output, their whiskey-making prowess was the envy of distillers in Kentucky and Scotland.

In this pre-Prohibition dynamic, wine merchants held more sway in the whiskey world than they do today because they held control over an essential piece of the supply chain — access to relatively inexpensive used barrels. Before the invention of the Coffey still, distilleries like Jameson — at this point one of the largest whiskey producers in the world — pumped out spirits from their enormous copper pot stills at a fantastic rate — sometimes faster than they could find maturation vessels.

When the Mitchell & Son wine began sourcing whiskey from Jameson to mature in their own bonded warehouse, they simply drove a horse-drawn wagon with empty wine barrels less than two miles from their warehouse to the old Jameson Bow Street Distillery, where they were filled and shipped back to the warehouse underneath Fitzwilliam Lane. There, the wine-infused whiskey slumbered in the damp subterranean cellars that snaked beneath Dublin’s city streets.

This historical primer introduces one of the most identifying product attributes of both Green Spot and Yellow Spot whiskeys — their use of a variety of used wine casks, both in finishing and original maturation of the whiskeys.

Because they dealt in various fortified and unfortified wines, their whiskeys matured with unique notes derived from the flavors imparted into the wood staves from the various types of wines. Historically, these wines would have included port, sherries — fino, Manzanilla, Oloroso, Pedro de Ximénez, etc. — Malaga, Marsala and Bordeaux. And, what’s more, most of the whiskey would have been matured exclusively in these barrels, not finished for a few years as is the trend today.

When the Jameson Bow Street Distillery was closed in 1971 due to industry consolidation, production was moved to Midleton. Today, distillation takes place at the Midleton Distillery in County Cork, and new make spirit is placed primarily into used bourbon barrels and stored on-site with Mitchell & Son owning rights to their allotment of casks. However, Yellow Spot continues to have a portion of whiskey that was matured exclusively in Malaga wine casks — a unique product identifier unlikely to be found elsewhere in the whiskey world.

When comparing these products, remember Green Spot is a no age statement — or NAS — whiskey, while Yellow Spot has a 12-year-old age statement.

In the past, Green Spot was offered as a 10-year-old product. But when production moved from Jameson’s Bow Street Distillery in Dublin to Midleton in County Cork, it disrupted cask inventory enough to cause Mitchell & Sons to not only remove the age statement from Green Spot but pull Blue, Yellow and Red Spot bottlings from shelves across the globe. Luckily, they sorted out those issues so we can continue to enjoy this gem of a traditional Irish single pot still whiskey whose unique taste and mouthfeel spans the ages.

Green Spot and Yellow Spot are owned by Mitchell & Son, a relatively small wine importer based in Dublin. Unlike other global brands most often produced by distilled spirits powerhouses, the Spot range represents the merchant’s only major distilled spirits brands.

This line comparison of two products from the same stable is relatively simple. Unlike some line extension products that have been introduced in recent decades in an effort to ‘premiumize’ the product line for profits, the Spot range represents a well thought out approach from its very beginning. In fact, the range gets its name from the dabs — or ‘spots’ — of paint the Mitchell family would apply with their thumbs to barrel heads denoting the maturation potential of each individual cask.

If you’re new to the Irish single pot still whiskey sub-category and looking to try one of the world’s genuinely delightful drams, Green Spot is a must.

Although Yellow Spot’s price point is a bit dear, keep in mind that the extra $35 gets you an additional 12 proof points, making the two more comparable in price on a proof-gallon basis. And remember, Yellow Spot has a 12 year age statement while Green Spot is a NAS estimated to be about seven years. Yellow Spot also has a portion of 12-year Malaga cask matured whiskey, a nod to its historical past and a unique product attribute unlikely to be found anywhere else.