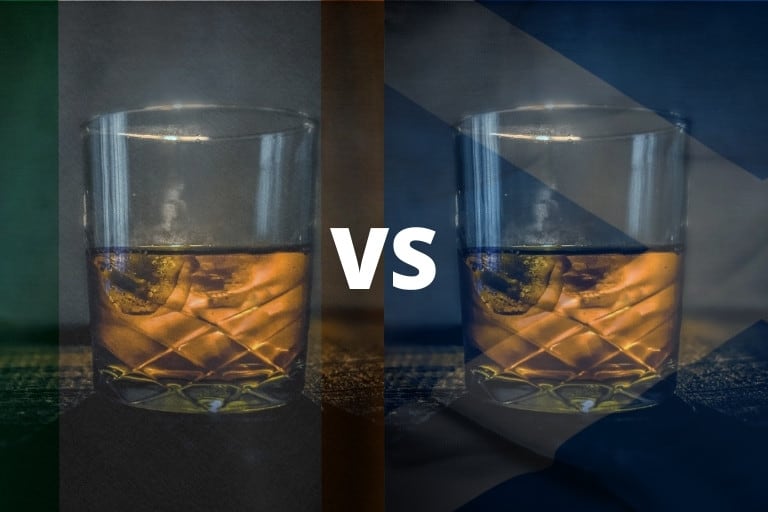 Irish and Scottish whiskies have intertwined histories that date back nearly a millennium. But for the modern whiskey fan, knowing the nuanced differences between these two popular types of whiskey will open a whole new world of flavors for your taste buds.

Unlike their Canadian and American whiskey cousins, the vast majority of both Scots and Irish distilleries forsake the spice notes inherent in Canadian blended whisky, American rye whiskey and most bourbons. But as you’ll see in this post, that does not limit the range of flavors available in the Irish and scotch sub-categories. On the contrary, with hundred of distilleries devoted to whiskey production sprinkled across the two islands, it would take a lifetime of exploration to taste them all.

Read on to see our deep dive into how mash bills, fermentation, the maturation process, and the innovative use of wooden barrels and a host of various stills during the distillation process create the perfect segue into the broader world of whiskey.

One quick note before we begin: Scots spell it ‘whisky,’ while the Irish use ‘whiskey.’ As a result, you will notice both spellings throughout this post.

Scotch describes whisky made in Scotland. Irish whiskey is made on the island of Ireland.

As you’ll see throughout this post, there are many shades of nuance when comparing the two. But as an overall concept, the whiskey’s origin might be a great first step.

There is a lot of confusion about the main differences between Scotch and Irish whiskeys. One reason may be the abundance of insufficient information on the internet. When discussing fermentation, distillation and maturation processes, many web pages devoted to this topic contain broad generalities shorn from their context.

To set the record straight, we’re going to offer a deep dive into the production processes of these spirits that we hope helps address the many questions out there.

The biggest difference between the fermentation processes for malt scotch and Irish whiskeys is the exclusive use of malted barley for single malt scotch versus a blend of malted and unmalted barley in the production of Irish pot still whiskey.

Both Irish and Scots distillers each have centuries-long histories of evading the king’s tax collectors. In Ireland, the use of unmalted barley came about due to a loophole in whiskey tax law.

Traditionally, a portion of malted barley was used in every whiskey mash due to the enzymatic properties of the grain. To malt barley, a brewmaster or whiskey maker first soaks the grain to induce fermentation, then quickly exposes the germinating seed to heat to halt the process. This small barley shoot contains enough enzymes to help convert the starches in the entire mash — whether it be combined with wheat, corn, rye or another grain — into sugars the yeast can then turn into alcohol.

It is generally stated that Irish whiskey is distilled three times while scotch is distilled twice. There is truth to this, but — and this is a big but — it is vital to grasp the context of the specific sub-categories of each product type to understand how this production technique affects flavor.

The first important distinction is between malts and blends. One difference between the two is the use of copper pot vs. column stills.

Malt whiskeys must be made in traditional copper stills from 100 percent barley. Generally, distillers in Scotland use two distillations, while Irish distillers utilize triple distillation to make malt whiskey.

Grain whiskeys are typically made using the more modern and industrial continuous column distillation. These can be made from any cereal grains, but in practice, they are generally made from mostly wheat or corn, with some malted barley used for enzymatic conversion of starches.

Again, we’ll discuss many shades of nuance in subsequent sections, but understanding the concept behind the terms malt and blended whiskey will go a long way in connecting the dots with what’s inside the bottle.

The rules for scotch were codified by the United Kingdom, while Irish whiskey laws were enacted by the Irish legislature or Oireachtas. As a result, the legal frameworks for the two distilled spirit types have many differences. But in terms of maturation, they agree: three years in oak casks – or, as distillers often say, three years and one day.

While Ireland has no size limit for the wooden casks used during maturation, scotch whiskies have a maximum capacity of 700 liters or 185 gallons for their oak casks.

Because bourbon and other American whiskeys require new American charred oak barrels, most casks used in the maturation of both scotch and Irish whiskeys are used American barrels. In fact, many distillers in the British Isles have coopers of their own that help recondition old bourbon casks. For example, the 250-liter hogshead cask popular with scotch whisky makers is made with reconditioned staves from the standard 53-gallon (200L) bourbon barrel.

But American oak barrels are not the only type of cask used for maturation. Distillers utilize secondary casks from across the world of distilled and fermented beverages. Among the master blender’s arsenal is the 650-liter Madeira drum from Spain, the 550-liter Port pipe from Portugal, 500-liter butts and puncheons, the 350-liter cognac cask made of Limousin oak from France, hogshead and bourbon barrels made from American oak and the 125-liter quarter cask. Each style of cask has a distinct impact on the overall flavor profile of the finished product.

All types of scotch whiskies are required to be aged for a minimum of three years in oak.

Single Malt Scotch Whisky — Must be distilled at a single distillery in Scotland from a mash bill of 100 percent malted barley using a copper pot still. Considered a premium product, this is the No. 1 scotch sub-category in terms of volume sales.

Single Grain Scotch Whisky — These whiskies are generally blended with single malt scotch to create blended scotch, but some single grain whisky brands — like Haig Single Grain Scotch Whisky — are available on the market. The ‘single’ in single grain does not mean it is made from one grain but rather produced at a single distillery. Most single grain whiskies are made predominantly with corn or wheat and distilled in a reflux column for a neutral flavor profile. Because they are not allowed to use lab-produced enzymes, all scotch distilleries use malted barley in all mashes.

Blended Malt Scotch Whisky — The art of blending together different single malt whiskies from Scotland’s various regions is an art form that goes back centuries. In the past, it was previously called pure malt or vatted malt whisky, but following updates to legislation in 2009, those terms are no longer allowed to be included on the label. By combining peaty Islay with a floral Highland scotch, for example, blenders can come up with unique malt expressions — often for the benefit of private scotch clubs and societies.

Blended Scotch Whisky — Blended whiskies are a combination of any of the above scotch sub-categories. Once the Coffey still was invented in the 19th century, scotch producers took advantage of the more inexpensive column distilled grain whisky and combined it with flavorful single malt to produce a more affordable product. As a result, world-renowned names like Johnnie Walker and John Dewar became famous by blending whiskies in their Glasgow shops. Often considered a more attainable product, blended scotch is the No. 1 sub-category in sales volume.

The region it was produced can be found on the label of every bottle of single malt scotch produced after 2011. While the production styles and flavor profiles are generalized and not codified by law, they reflect centuries of tradition.

The Highlands — Sweet, herbal and flowery, the Highlands region is the largest landmass. Many of the most recognizable brands, including Glenmorangie, Oban and Dalmore, hail from this region. Following a 2009 update, the Islands region was folded into the Highlands.

The Lowlands — represent the region near the English border and include the cities of Edinburgh and Glasgow. Traditionally, many of these distilleries were used to produce grain whisky used for blending. But today, more distilleries are popping up as the whisky renaissance increases global whisky tourism. Popular brands include Auchentoshan and Glenkinchie.

Speyside — This region is carved out of the Highlands around the River Spey, also known as the Speyburn. Speyside boasts the most distilleries, including many of the most internationally recognized brands. The clean, soft water of the River Spey incidentally is one of the best salmon fly fishing destinations in Europe. Popular brands include Glenfiddich, Glenlivet, Aultmore and Mortlach.

Islay — The Isle of Islay is the most challenging destination to make it to, requiring either a hopper flight or passage on a ferry. Many of the dunnage style whiskey maturation warehouses abut the sea and spray from the crashing waves give many brands their salty sea brine character. Another identifiable feature of Islay malts is their traditional use of peat during the malting process. As a result, most Islay malts have an identifiable peat smoke character and an overall flavor profile that can be pleasantly medicinal.

Campbeltown — The smallest region in distilleries and volume, the peninsular Campbeltown region is home to the Glen Scotia, Springbank and Glengyle distilleries.

All types of Irish whiskey are required to be aged for three years in oak.

Irish Grain Whiskey — Like its Scottish cousin, Irish grain whiskey is traditionally used in blends. It is most often column distilled using a mash of majority corn or wheat.

Irish Pot Still Whiskey — A style of whiskey unique to Ireland, pot still whiskey is made from 100 percent barley using a minimum of 30 percent malted and 30 percent unmalted barley. Examples include Redbreast and Green Spot.