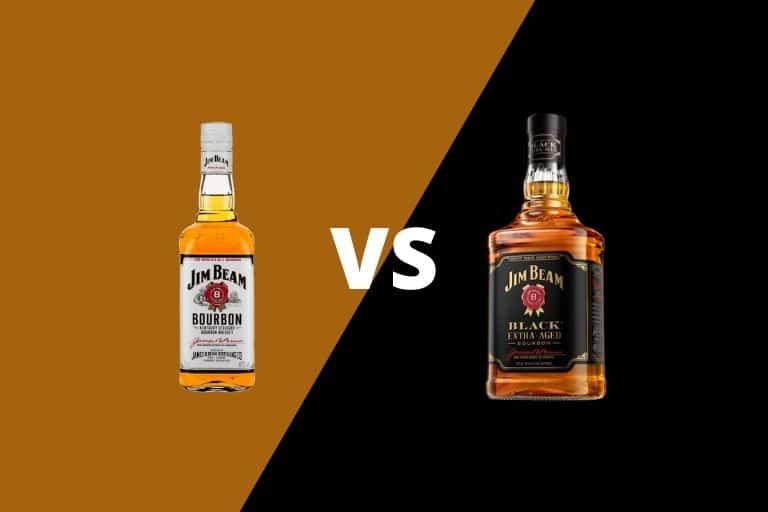 Because Jim Beam Black also comes at a higher price point, you might be asking ⁠— ‘Is it worth all the hype?’

In this post, we’ll compare the two side-by-side to examine whether Jim Beam Black is worth the extra price.

The story of Jim Beam dates back to the first settlers into the Kentucky territory in the late 1700s. The first Beam family ancestors moved to Kentucky in 1778. The Beam family started distilling soon after that. Fifth-generation distiller James B. Beam — the historical character behind the Jim Beam brand — began making whiskey in 1894.

Following the repeal of Prohibition, the Jim Beam name quickly grew to become one of the largest bourbon brands in the United States. To this day, the Beam family is a Kentucky distilling force, with family members making whiskey on stills throughout the state. And today no brand sells more bourbon than Jim Beam.

Jim Beam Black got its start in the 1980s when it was released as Beam’s Black. Part of its appeal was as a competitor for Jack Daniel’s, which also features a black label. But it was released with an 8-year age statement and positioned as a more premium bourbon than the more recognizable standard white label expression.

Jim Beam is produced by Beam Suntory — the third-largest producer of alcoholic drinks in the world.

Suntory was the first company to distill whisky in Japan and has a history of production that goes back to the 1800s. Their world-renowned Japanese whisky brands include Suntory, Yamazaki, Hakushu and Hibiki. Together Beam Suntory owns many single malt scotch brands, including Ardmore, Auchentoshan, Bowmore, Glen Garioch and Laphroaig.

Nothing to see here…

By way of comparison, there is no difference between the mash bills of Jim Beam’s white and Black labels. In fact, on most days the production team wouldn’t know which product their day’s work will end up being sold as. It is only when the barrels are dumped and bottled years down the road are those decisions made. The distillers will be working with a mash recipe — in this case, the Jim Beam or standard bourbon recipe.

As with the mash, the distillation of both products will be identical. Again, the production team will not know where the new make they are distilling will end up.

Beam Suntory operates three distilleries in Kentucky — two of which produce spirit that will be used for Jim Beam products. The Jim Beam Distillery in Clermont is the main site for the production of Jim Beam, while the Booker Noe plant in Boston also produces spirit that will end up in Jim Beam bottles.

The unaged ‘white dog’ or ‘newmake’ spirit comes off the two column stills at the Booker Noe Distillery or the one column still at the Jim Beam plant. The mash bills and fermentation will be identical to this point. Distillers often note that each still has its own unique contributions to flavor — even when all other inputs are otherwise identical. But without speaking to Freddy Noe or a member of the Jim Beam production team, we can’t know if or how the clear spirit is aggregated before entering the barrel.

At this point, the young whiskey is most likely not destined for a specific bottling, so its fate is yet to be determined. Making a distinction between Jim Beam’s white and black label offerings is difficult, if not impossible.

This is where all the magic happens.

A little time in the barrel is the biggest thing that sets these two brands apart. Because the spirit in Jim Beam white and black label are identical until they reach the maturation process, let’s follow the life of a barrel to learn how the subtle changes during maturation can have a profound impact on flavor.

The white dog or newmake spirit will come off one of the three stills at the Booker Noe or Jim Beam plants. This spirit will be racked into new American charred oak barrels, as required by U.S. law. Jim Beam uses No. 4 ‘alligator’ char barrels, which have a tendency to impart big, bold flavors on the finished whiskey.

Bourbon barrels are made from American white oak staves. Exposure to open flame creates a layer of char on the insides of those staves. Coopers, or barrel makers, use a scale from 1 to 5 to determine how thick that layer of char will be. 1 is closer to a toasted wine barrel, while 4 and 5 barrels have a considerable amount of char on the inside of the wood staves. The ‘alligator’ nickname comes from ridges created by prolonged exposure to flames. These ridges resemble the bumps on the back of an alligator.

After the barrels are filled, they will be transported to a maturation facility — one of the first divergences of these heretofore nearly identical barrels. Both the Booker Noe and Jim Beam distilleries have multiple barrel warehouses. The maturation facilities utilize the multi-storied wooden rickhouse structures that are common throughout Kentucky.

Each warehouse has its own micro-climate based on its location on the site, its orientation, number of stories, construction materials, building age, etc. And within each structure, barrels at different locations will have a distinct taste out of the barrel — even if they originated from the same still run and were stored on the same day. Through decades of experience, the production and blending teams recognize the sweet spots in each warehouse — the areas where the micro-climate is just perfect for maturing whiskey.

By utilizing these beautiful barrels, the blending team can develop unique extensions — like Jim Beam Black — that have a different flavor profile than other offerings.

Today, both brands are NAS — or Non-Age Statement whiskeys. But we can make some educated guesses when it comes to age profiles.

Both are labeled as Kentucky Straight Bourbon Whiskey on the label. By law, a ‘straight bourbon’ must be aged for at least two years in a new charred American oak barrel. Although it’s not on the label, Jim Beam claims a 4-year age statement for Jim Beam white label in promotional materials. And a fluke in the law requires an age statement for straight whiskeys under four years. We know it’s confusing, but we’re safe to assume Jim Beam white label is four years.

Black Label was launched with an 8-year age statement in the 80s and was originally promoted as ‘double aged’ as compared to white label. The age statement stuck around until 2014 — the height of the bourbon boom in the United States. Although the company no longer uses the 8-year age statement or the double aged term, the production team has made an effort to keep the flavor profile the same. Due to the nuances of maturation, a 5-year barrel from the warehouse’s sweet spot can taste like an 8-year barrel from elsewhere in the rackhouse. So, although these flavorful younger barrels may prevent Jim Beam from using the 8-year statement today, we can say that the relative flavor profile is in line with a bourbon about that age.

While we’re on the subject, a look at the current label of Jim Beam Black shows a fascinating insight — a medallion from the 2016 International Wine & Spirit Competition. While many brands showcase medals on their packaging, not all are equal. The IWSC is perhaps the most highly-regarded in the industry, so Jim Beam Black earning the title ‘World’s Highest Rated Bourbon’ is a pretty big deal.

Jim Beam Black is bottled at 86-proof, or 43 percent alcohol by volume and has a recommended price of about $24.

Jim Beam white label is bottled at 80-proof, or 40 percent ABV and has a recommended retail price of about $18.

Both of these bottles are knock-out steals at their price points.

Description: In the glass, Jim Beam is golden-amber in color.

Description: In the glass, Jim Beam Black has the deep gold color of dark chestnut. Its legs are healthy at 86-proof.

Finish: A lingering corn sweetness, with vanilla, caramel and raisin.

It might sound banal, but it’s pretty safe to say Jim Beam Black is better because it’s supposed to be better. We don’t think Master Distiller Freddy Noe would argue with that.

And for an extra four bucks in asking price, six proof-points in strength and an additional two to four years in the barrel is by no means an unreasonable return on investment from a whiskey brand. Trust us, there are plenty of other brand extensions that ask for more and give you less in return.

Each is an excellent bottle of bourbon that is versatile enough to be enjoyed in a mixed drink, neat or on the rocks.

If you’re already a fan of Jim Beam’s world-renowned bourbon taste, go ahead and treat yourself to the trade-up opportunity of Jim Beam Black. You deserve it. And if you don’t believe us, line them up for a bourbon blind tasting and see if you can notice the difference for yourself.