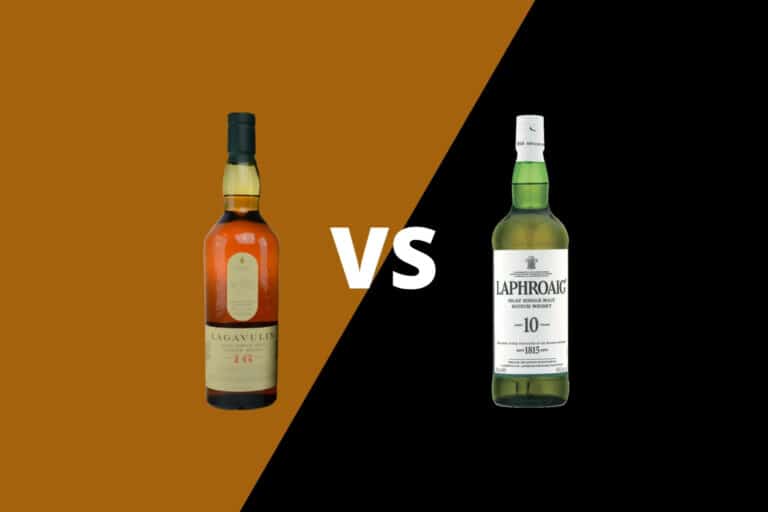 Today, we pit two peated whiskies that represent the smoky flavor and phenolic character for which the Isle of Islay is renowned.

Whisky drinkers are often split when it comes to the traditional peated scotch whiskies, many of which hail from Islay. You either love them, or you hate them.

Either way, you can’t have an opinion on which Islay malt is the best without trying these two historic drams. So, let’s hit the peat fields and learn more about these two legendary brands.

During the 17th and 18th centuries, Scotland was rife with illicit distillation. As distillers attempted to dodge the king’s taxman, illegal distilleries sprouted across Scotland — from the Highlands to the Hebrides Islands. The island of Islay — specifically the area around Lagavulin Bay and the Kilbride River — was a hotbed of activity.

The villages on the Bay of Lagavulin and the surrounding coastline were home to at least 10 illicit distilleries — and most likely many times more. But beginning in the first decades of the 1800s, entrepreneurs looked to take the distilling heritage of the area mainstream. In a few years,  the Island of Islay saw a flurry of construction as a pathway to legitimacy was established.

The most notable occurred after a man named Peter Mackie — the distiller at Lagavulin during the 1880s and 90s — leased the equipment at Laphroaig to run some additional distillations and expand his distillery’s capacity. He became infatuated — daresay obsessed — with replicating the flavor of Laphroaig on his own stills. Despite attempting to replicate the production process entirely, he failed to replicate the flavor. So, he went as far as creating a distillery that was, for all intents, a complete replicate — stills, mash tuns, washbacks and other equipment built precisely to scale. This second distillery — Malt Mill — operated on the Lagavulin grounds until they were merged in 1960.

Despite his attention to detail, Mackie’s frustration at matching the exact flavor profile is something distillers feel today. Despite science coming a long way in understanding the molecular chemistry involved in whisky fermentation, distillation and maturation, this paradox persists in the 21st century. Today, distillers attempting to create ‘copycat’ whisky brands are often frustrated by wildly different finished flavor profiles, despite attempts to replicate the equipment and processes completely. Even brands looking to increase capacity by building additional stills — precisely to specs and using the proprietary knowledge — often fail to replicate the flavor on the more extensive equipment.

Each product must have an identical mash bill of 100 percent malted barley to be considered single malt scotch whiskies. But the big story — and perhaps the most noticeable flavor ingredient — to come from fermentation really is the use of peat during the malting stage.

Fermentation is when a mash of cereal grains is introduced or washed with water, and then the sugar compounds gleaned from the grains are consumed by yeast to produce an alcoholic liquid that is then distilled in the next phase. Because all single malts are made with 100 percent malted barley, the conditions under which fermentation takes place play a more significant role than other types of whiskies.

Barley grain has long been utilized as a staple crop in Scotland, including in the Highlands and the Inner Hebrides islands like Islay. There, the grain could be used for food, the production of beer and ale and — of course — to make whisky. Another important use of this staple crop was to feed livestock, including the celebrated long-haired Highland cow, which originated in Scotland.

Malting is the process in which the barley grain is introduced to water to induce germination, and then the wet grain is quickly dried with the use of heat. Today, Islay is known as the home to peated whiskey. But there was a time when nearly all the whiskies made in Scotland were peated. Before coal — and later electricity — was widely distributed outside of the urban Lowlands, the most common fuel source in many parts of Scotland was peat, or turf — flammable bricks of composted bog material dug from the many marshy peat fields around Scotland.

When peated whisky fans — aka ‘peat heads’ — talk about how smoky whisky is, they’re referring to the phenol levels imbued into the barley grain during the malting phase. The peat gives the finished whisky the signature smoky flavor and medicinal aroma most have come to associate with Islay scotch in general and peated single malt in particular.

On Islay, the distribution of coal and other fuel sources faced an additional distribution wrinkle — crossing the bay or firth from the mainland. For this reason, Islay producers retained the tradition of peat during the malting phase as a means of necessity. Or, it’s a clever bit of marketing copy used to help sell bottles of Islay peated whisky. As with most things, the truth is somewhere in the middle.

To make single malt whisky, the ‘mash men’ and women must first make a sugary liquid — called wort — by soaking the malted barley in liquid, then draining it before adding it to the mash tun to add yeast and induce fermentation. Most wort is made from washing the grain three times, some twice, others four or five times. Again, this decision makes a difference in the overall flavor.

The shape, size and materials used to build the mash tun, fermenters and washbacks play a critical role in the flavor profile of the finished product.

The Lagavulin Distillery is in the village of Lagavulin on Lagavulin Bay. Laphroaig is about a mile down the road near the Kilbride River. Both are on the coast near Port Ellen.

Because all single malt whiskies are made from the same mash bill — 100 percent malted barley — a great emphasis on the production techniques that offer variety in flavor. And although single malts are required to be produced in a copper pot still as opposed to the more modern and efficient column still, the size and shape of the still make a difference in the finished product.

Lagavulin is recognized for having long and slow distillations in signature pear-shaped stills. A longer distillation time increases the flavor derived from the oily congeners and other flavor compounds that are often associated with the ‘feints’ — the liquid pulled from the still later in the run after the hearts are collected, called ‘tails’ by distillers in the United States.

On the other hand, Laphroaig utilizes seven stills in the production of their whisky. The facility operates three wash stills with a 10,900-liter capacity, and four spirit stills — three with a 3,640-liter capacity and one that can process a 7,280-liter charge.

Lagavulin’s pear-shaped stills have a high neck and steep, dramatic angle in the lyne arm — the curve at the neck of the still that slopes down and forces rising alcohol vapors to condense. The lyne arm angle is critical because it affects the amount of reflux during distillation, which determines how many esters, congeners, and other flavor compounds make it into the finished distillate.

Laphroaig’s stills, by comparison, are squat with a less pronounced angle in the lyne arm.

After the distillation process is complete, the distiller is left with a clear new make spirit that is then placed into wooden casks to rest. The interaction with wood gives all whiskey its signature golden, brown or amber color along with tannic quality and vanilla and baking spice flavors.

In the case of scotch whisky, the spirit is required to be aged in oak barrels. And because American bourbon is required to be matured in new oak, the de facto maturation vessel in Scotland is used bourbon barrels because of their availability and low price.

Lagavulin is produced by Diageo, the London-based behemoth that is considered the largest distilled spirits and scotch producer in the world.

Lagavulin 8 Years Old has a suggested retail price of about $51 for a 750mL bottle at about 96 proof, or 48 percent alcohol by volume.

Laphroaig is produced by Beam Suntory – the American subsidiary of Tokyo-based Suntory, often considered to be the third-largest producer of distilled spirits in the world.

Description — In the glass, Laphroaig 10 is chestnut in color, with a straw-gold hue and moderate legs at 86 proof, or 43 percent alcohol by volume.

Nose — The nose is all medicinal creosote smoke. Secondary aromas include a pine and cedarwood notes, cinnamon, clove and baking spices, mint and tobacco.

Note: The most standard Lagavulin 8 Year was not available in our local market at time of publication.

Description — In the glass, Lagavulin Distillers Edition has a deep tawny color, with a red-brown amber hue. Moderate legs at 43 percent alcohol by volume, or 86 proof.

For those looking to learn more about smoky whiskies these are arguably two of the most popular, peatiest whiskies available to American consumers on the market — along with Ardbeg single malt scotch, also from Islay.

The smoky notes available in each bottle of scotch offers the perfect introduction to the entry level whisky drinker hoping to learn more about the medicinal, smokey character that has become synonymous with the Islay malt sub-category.

Hardcore peat heads and novices alike will benefit from the matchup of these two knockout brands in a blind side-by-side tasting.

Other Peated Whiskies to Try 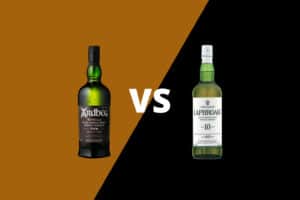