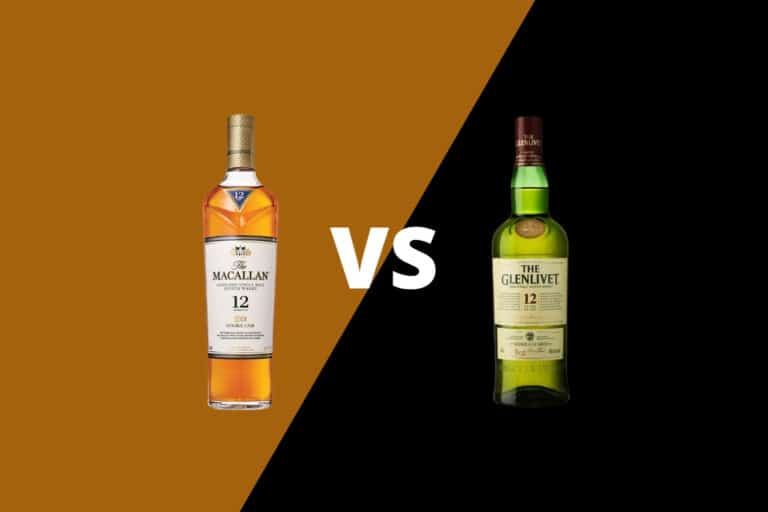 Two legendary Speyside whiskies face each other in this head-to-head matchup.

But before we get any further, we should address the elephant in the room: Is the Macallan a Speyside Whisky or a Highland Whisky?

An astute whisky lover may wonder why we’ve gone on about these two Speyside brands when the Macallan clearly has the word ‘Highland’ on the label. The Macallan is most definitively a Speyside Distillery — with the banks of the River Spey abutting the compound. But the Scotch Whisky Regulations of 2009 define the geographical regions where single malt whisky production occurs. It has identified Speyside as a subregion of the Highlands. So, producers have the choice of terms for their labels.

As a result, the Macallan can be found described alternately as a Highland and Speyside whisky.

To tell the story of these two brands who sit on the banks of the River Spey, it behooves us to explore the history of whisky-making in Scotland.

The Scots have been fermenting beer made with barley and other grains and then distilling it into spirits for a long time. By some estimates, as long as a millennium ago. But written evidence of scotch distillation dates to 1494, when the King’s exchequer wrote that malt was sent to Friar John Cor to make aquavitae — Latin for the ‘water of life,‘ which in Scots Gaelic translates to uisge-beatha, later anglicized to simply ‘whisky.’

Exchequer is a royal accountant. And as long as whisky has been made, the authorities have been looking to tax this valuable commodity.

The Acts of Union in 1707 united the kingdoms of England and Wales with Scotland to create Great Britain. Part of the treaty required that alcohol be taxed at the same rate throughout the island. And as soon as the King’s men began collecting taxes on the whisky distilled in Scotland, proud Scots began ducking those taxes.

Thus, a long and illustrious tradition of illicit distillation began in Scotland. At one point in the early 19th century, about 14,000 illegal stills were confiscated each year by authorities. That’s a lot of illegal hooch! Illicit distillation was so prolific that Robert Burns, Scotland’s national bard, wrote lyrics about the exciseman in 1792.

When the laws were changed in 1823, the Macallan and the Glenlivet — only 18.5 miles away — were two of the first sites to obtain licenses and ramp up commercial production.

That year, George Smith obtained a license to operate a distillery in the Glenlivet — which translates to Valley of the Deer. The following year, Alexander Reid was granted a license to distill the Macallan on the grounds of the Easter Elchies House, which was built in 1700. The distillery was known by that name until the 20th century.

The Glenlivet has long had a reputation for being one of the finest whiskies available. Even before it was legally produced, everyone from locals to Scottish and British royalty appreciated the single malt produced in the valley.

But before 1966, the Macallan was a component whisky used in blending. That year, it launched an international campaign to appeal to an artistic and educated crowd in the US and UK. Today, its aspirational, high-end appeal has made it one of the top-five single malt scotch whiskies in terms of value.

Both products are single malt scotch whisky products, which are required by UK law and international treaty to contain 100 percent malted barley in the mash bill — or list of grain ingredients.

However, fermentation techniques can offer a wide variety of flavors. Mash tun and washback size, shape, material, the fermentation duration and yeast strain all affect the flavor of the wort — and later the distillate.

The real star here is the high-quality water of the River Spey. Both distilleries utilize the cool, clean spring-fed waters to produce their products.

The Macallan newmake spirit comes off the still at an aggregate 70 percent alcohol by volume or 140-proof — a relatively low-alcohol cut point, which might point to a longer run deeper into tails.

The Macallan Distillery recently underwent one of the most publicized renovations in scotch history. The new facility was launched in 2018 and featured a striking design. Most notable was the subterranean feel of the site — utilizing a turf roof, architects built a sprawling campus that was designed to emulate the rolling fields of the Scottish highlands.

Distillers often bemoan how renovations and new equipment can alter the finely-tuned distillation process of whisky distilleries. Even moving the same stills across town to a new cement pad or building a still to the exact same dimensions as the previous equipment is known to throw off-flavors in the newmake spirit. Only time will tell — about a decade or so — whether the upgraded facility and eco-friendly distillation techniques will have any impact on flavor.

Both distilleries benefit from the growing whiskey tourism business that has made the Speyside region of Scotland — the most densely packed cluster of distilleries in the world — a top global destination.

Under its domed turn roof, the Macallan distillery has 24 stills — the shortest in Scotland. Each able to hold a total charge of just under 4,000 liters. Macallan is also known for a tight hearts cut, leading to a mellow and light-bodied newmake spirit. This may help balance what is often described as a ‘heavy’ spirit – reflecting the shorter sill design.

When distilling on a copper pot still, the size and shape of the still influences the rate of reflux and the amount of contact the vapors have with copper. As alcoholic vapor is separated from the rest of the liquid wort, it rises to the top of the still. Often, it will collect at the top of the still, recondense and drop back down into the pot. This reflux acts as form of extra distillation for the liquid, affecting the amount of congeners, methyl alcohols and other flavor compounds make it into the final distillate.

As you drive up to the  Macallan facility, it is an impressive sight. However, because of visitation restraints caused by the COVID-19 pandemic, the visitor’s center remained closed during a recent trip to the Speyside region. Although the Macallan wasn’t the only distillery forced to close recently opened or renovated tasting rooms to the public due to the pandemic, their closures had to be a disappointment to management. This is a shame because the impressive facility – which some locals have dubbed ‘Malt Disney World’ — is positioned as a crowd-pleaser.

The best we could do was a shot of the gate.

The Glenlivet facility includes 28 stills, each unique, adding complexity to the resulting distillate. For decades, it has been the original destination for whisky pilgrims hoping to capture the essence of scotch production. It was also closed during our December 2021 visit.

The most notable difference between these two brands might be their approach to maturation. While the standard range from the Glenlivet will reflect the predominant use of ex-bourbon barrels, the Macallan utilizes a high proportion of sherry oak casks.

The Macallan relies heavily on Sherry-seasoned casks to mature their whisky — even more so than the many other single malt whisky brands that lean into the finishing technique. The Macallan has invested in their own cooperage, which produces Spanish oak casks seasoned with sherry wine from Jerez, Spain. In this way, the Macallan can produce sherry casks for its own exclusive use when maturing their whisky. Large, 500-liter sherry butts are the primary maturation vessel for most of the Macallan’s bottlings.

The standard cask used for maturation throughout Scotland is the ex-bourbon barrel. They are easy and comparatively inexpensive on the secondary market. Ex-bourbon barrels are often re-charred before being filled with newmake spirit. Often, distillery coopers break down used 53-gallon bourbon barrels and reform them into hogshead casks, which can hold about 80-gallons.

The Macallan does not use caramel coloring when bottling its whiskies, which means the rich ruby-red tone and color of many products reflects the use of sherry casks.

To entice the single malt fanatic with means, the Macallan came out with the Fine & Rare Collection, released in 2002. These age-statement ‘vintage’ products feature the year each cask was distilled and the number of years it matured. They have solidified the brand’s positioning as an ultra-exclusive powerhouse.

The Glenlivet is produced by Pernod Ricard, a moderately-sized spirits and liqueurs producer based in Paris, France. For a 750mL bottle of the Glenlivet 12 Year Old at 80-proof, you can expect to pay about $53. Pernod-Ricard also offers brands including Jameson and Green Spot Irish whiskeys and Ballantine’s Blended Scotch.

The Macallan is produced by the medium-sized and privately-owned international spirits company the Edrington Group, Ltd., based in Glasgow, Scotland. For a 750mL bottle of the Macallan Double Cask 12 Year Old at 80 Proof, you can expect to pay about $67.

In addition to the Macallan, the Edrington Group makes Highland Park and the Glenrothes single malt Scotch whiskies and the Famous Grouse blended Scotch whisky.

The Macallan is known for its attraction to collectors. Some of the most expensive bottles of whiskey ever sold at auction held the Macallan label. And we’d wager some of the more expensive single malts at your favorite dram shot might carry the Macallan name.

Their prominence in the travel and ultra-premium and above categories has made it a status symbol for a demographic of affluent and aspirational customer who sees themselves as appreciating the finer things in life. In fact, the title generated in the tab when visiting the website reads, ‘Luxury Single Malt Scotch Whisky.’ With this approach, the Macallan has earned a name as one of the top whisky brands in value.

Description: In the glass, the whisky has a tawny color with a straw-gold hue. It has moderate legs at 43 percent alcohol by volume, or 86 proof.

Nose: On the nose, notes of walnut and malty cereal notes, with vanilla, caramel, herbal aromas and black pepper.

Tongue: Vanilla and butterscotch, with cinnamon and a nutty character.

The good news? You can’t go wrong no matter who you choose in this head-to-head matchup.

If you’re new to the world of whiskey, the sub-category of Speyside Single Malt Whisky is worth exploring. And the world-renowned pedigree of the Glenlivet — arguably the most well-known and respected single distillery in the world — is a great place to start. And it’s price range, slightly below the Macallan, makes it an enticing dram the next time you’re at your favorite bar.

Then, try the Macallan and see whether the elevated price point and cult-like status among collectors is worth all the hype.

Either way, you get to sample two popular and smooth whiskies! 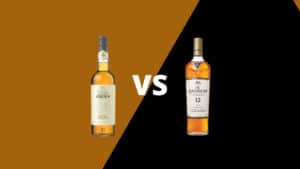 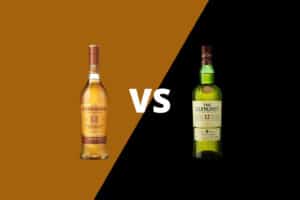 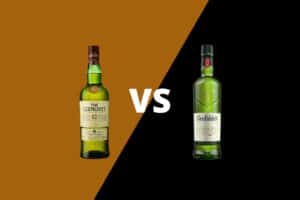