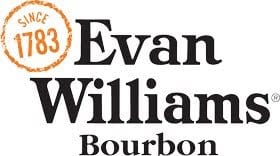 As one of America’s most iconic Kentucky straight bourbon whiskies ever since its inception in 1783, Evan Williams Bourbon has continued to set the bar by which many of its competitors are judged to this very day, and for good reason. Anyone with even the most cursory knowledge of America’s whiskey heritage is sure to know about the extensive contributions that the Evan Williams Bourbon brand has made to America’s modern-day whiskey heritage.

With its roots dating back to 1783, Evan Williams Bourbon is most commonly considered one of America’s oldest Kentucky bourbon whiskey brands. The bourbon’s founder, Mr. Evan Williams, immigrated to The United States of America from Wales in the 18th century and quickly established roots in what was to become the epicenter of America’s whiskey industry, Louisville, Kentucky.

Interestingly, Mr. Williams’ contributions to the local whiskey industry, and Kentucky’s overall economy, gained him great esteem and resulted in him having been elected to Louisville’s inaugural wharf master.

Other versions of Evan Williams Bourbon include a “White Label” variant that prides itself as adhering to “Bottled in bond” protocols, along with “Evan Williams 1793,” which is aged for roughly nine years and sold in much fewer quantities. The brand also offers an “introductory level” single barrel vintage bourbon aimed at new consumers wanting to make a foray into the premium whiskey market without breaking the bank.

In total, Evan Williams Bourbon, and its respective variants, are America’s second greatest selling Kentucky Straight Bourbon by quantity, only trailing the Jim Beam brand of bourbons. Undoubtedly, the Evan Williams brand is a powerful force in American whiskey. Its respective bourbon offerings should be considered requirements for the whiskey cabinet of any self-respecting whiskey aficionado.

Recently, I was asked to review Evan Williams Green Label – a brand extension of the more familiar Black Label product. The only problem: I’ve

Evan Williams Black Label Bourbon is the No. 2 selling Bourbon whiskey in the United States. Its price point — on the upper edge of

Evan Williams Honey Bourbon is a wonderful choice for anyone desiring a mild, light, and well-crafted bourbon. The bourbon is flavored with real honey, and

Evan Williams Single Barrel is one of the bourbon industry’s most acclaimed and famous spirits. The bourbon is the only single barrel variety with a