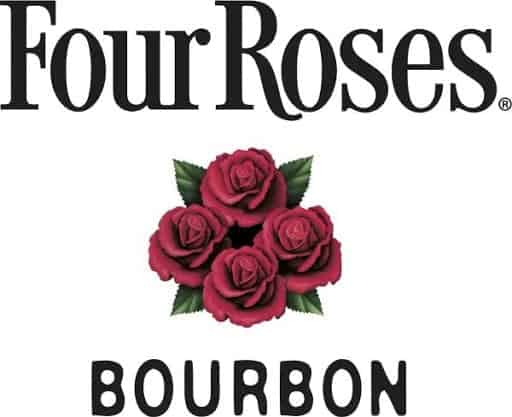 Four Roses Bourbon is handcrafted bourbon made in small batches to create a unique, smooth, and well-balanced spirit. The bourbon is the only brand distilled with five proprietary strains of yeast two mashbills or grain recipes. They combine 10 different recipes in different ways to create their unique and unmatched bourbons.

There is a fun legend behind the name of the company founded by Paul Jones, Jr. It is said that he fell in love with a southern beauty and sent her a marriage proposal, asking her to wear red roses on her outfit at an upcoming ball if she agreed to marry him. She arrived at the ball wearing a corsage with four roses on her dress and thus the name Four Roses was born.

The bourbon is distilled in a historic 1910 Spanish mission-style building in Lawrenceburg, Kentucky. The brand is owned by the parent company, Kirin Brewery Company, which is located in Japan.

All batches of Four Roses bourbon start with the highest quality corn, rye, and malted barley. The distiller employs two mashbills, or grain recipes, in the creation of their bourbon. One mashbill is 60% corn and the other is 75%.

Each mashbill creates a spirit with a unique, spicy, rich taste that is unlike any other bourbon on the market. The different, proprietary yeast strains also help to create a bourbon that has a unique and unparalleled flavor and gives the spirits the flavor characteristics the brand has become known for.

Once the spirits have been made and distilled, it must be aged in oak barrels to qualify as bourbon whiskey. Four Roses use American oak barrels that are aged for at least five years. Different varieties of bourbon are aged for different lengths of time, which will affect their ultimate flavor and proof.

Since 1888, Four Roses Bourbon is a proven and high-quality bourbon line with a loyal consumer base. The Four Roses brand is highly respected for