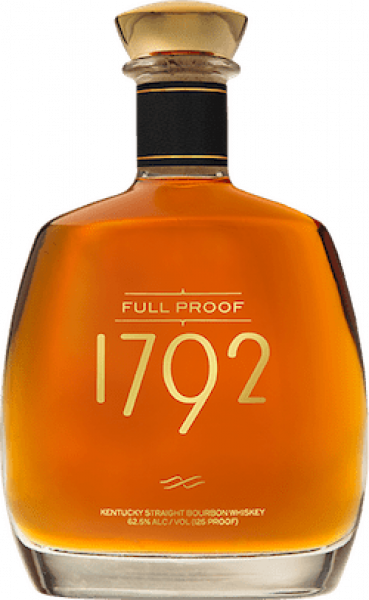 Originally known as Ridgewood Reserve 1792 and later, 1792 Ridgemont Reserve, today’s iteration of the brand is known simply as “1792 Bourbon”. This well-respected bourbon is born out of Kentucky’s rich bourbon history and has become a staple throughout American whiskey collectors worldwide.

Make no mistake, 1792 Bourbon Full Proof is a small batch Kentucky straight bourbon whiskey that is aimed directly at the highest tier of the bourbon market, so any expectation of it being your next “go-to” nightly drink could be misguided. It has a high proof rating, an extensive distillation process, and is most definitely not an introductory level whiskey. However, there is no need to be dissuaded by its high brow presence. If you know what to expect from this bourbon and what to look for, then it will definitely be one of the most memorable bourbon whiskies you’ve ever tried.

1792 Bourbon is owned by the well-renowned Sazerac Company and distilled and bottled in Bardstown, Kentucky, at the Barton 1792 Distillery. 1792 Full Proof is famous for being a full proof bourbon, with a high-rye content and full-bodied flavor spectrum.

For those who may not know about the significance of a full proof bourbon, allow us to share some insights. Unlike most Bourbon whiskey, a “full proof” bourbon begins its barrel-aging life with a 125 proof point rating, significantly higher than most bourbons.

Traditionally, the average bourbon begins its barrel-aging life with a proof between 80 and 90. Essentially, this means that full proof bourbon has a much higher alcohol percentage than the most common bourbons found on the market.

As some may already know, and others will surely find out, drinking full proof bourbon whiskey is no experience for the faint of heart. Also known as “cask strength whiskey,” full proof bourbon has an extremely high alcohol content percentage, which has its own pros and cons.

The pros of full proof whiskey are twofold. Firstly, the taster can enjoy the bourbon in its purest and original form, and secondly, the taster can dictate how they would prefer to consume the whiskey. Some prefer to have the bourbon over ice or with a splash of water, and others may prefer ginger ale or soda. Regardless, full proof bourbon whiskey enables the taster to start with a more pure form of whiskey to dilute down to their personal preferences.

The Sazerac Company has not formally released the official mash bill of 1792 Bourbon Full Proof. However, many bourbon whiskey experts have surmised the ingredients by percentage to be around 74% corn, 18% rye, and 8% barley. 1792 Full Proof is aged in American white oak barrels for anywhere from 7 to 8 years and completes its aging process with a 125 proof point rating. The high proof rating places this bourbon in the upper echelons of high proof bourbons with an ABV of 55%-65%.

Ultimately, there is little negative to say about the overall experience associated with 1792 Bourbon Full Proof. The spirit is masterfully distilled, artfully aged, and presented beautifully to the end consumer. We are confident in giving a strong positive recommendation of 1792 Bourbon Full Proof to anyone desiring a sophisticated and elegant bourbon whiskey tasting experience.

Strong and full of flavor, this bold bourbon boasts an incredible deep and smoky taste, superbly balanced with sweet vanilla and notes of caramel.

Upon inquiry of the aromatic nature of 1792 Bourbon, the connoisseur will quickly experience wonderful notes of vanilla, rye spice, and sweet caramel. As the taster allows for more time to pass, they will also begin to pick up hints of oak and brown sugar.

The palate of 1792 Bourbon presents a rich and diverse flavor profile. With notes of rye spice, caramel, and rich vanilla, the taster is sure to have a multifaceted tasting experience.

The 1792 Bourbon tasting experience culminates with a moderate length finish that reintroduces notes of vanilla, caramel, and rye spice.