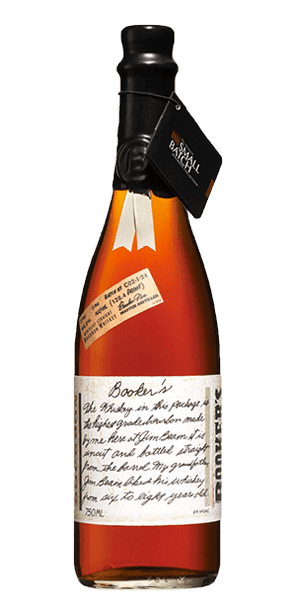 Officially introduced to the public in 1992, Booker’s Bourbon hit the whiskey market right away with great fanfare. Having been the first “small batch” bourbon ever, Booker’s Bourbon quite literally is responsible for the creation of an entire genre of whiskey, which is no small claim if you ask us.

The brand is steadfast in its old school traditions and has a strict belief in “whiskey first” practices. The brand does no marketing or advertising and believes in letting their Bourbon whiskey speak for itself. As “word of mouth” buzz has continued to grow around the whiskey industry for Booker’s Bourbon, the brand has begun to cement its reputation of being a “whiskey man’s whiskey”/

Booker’s Bourbon is classified as a straight bourbon and is distilled at the Jim Beam Distillery. The brand is currently owned by the well-known Beam Suntory company, which has become famous in its own right for consistently delivering exceptional bourbon whiskeys at very affordable prices.

Booker’s Bourbon has a mash bill of 77% corn, 13% rye, and 10% malted barley, which places it amongst many traditional mash bills used in the whiskey market today. The bourbon is historically aged for anywhere from six to eight years.

The bourbon is famous for its uncut and unfiltered bourbon distillation techniques, which results in the bourbon receiving a proof rating anywhere between 121 and 131 just prior to bottling.

For this cocktail, you will need to gather 1.5 ounces of Booker’s Bourbon, .75 ounces of falernum syrup, 10 spearmint leaves, 2 to 4 dashes of peach bitters, and 1.5 ounces of fresh lemon sour.

Begin making the cocktail by muddling the spearmint leaves and falernum syrup in a cocktail mixer with ice. Once fully mixed, introduce the other ingredients and shake the mixture for between 10 to 15 seconds. Once complete, strain the mixture into your favorite whiskey glass over fresh ice, and get ready to enjoy an amazing cocktail!

For this cocktail, we encourage you to collect 1.5 ounces of Booker’s Bourbon, .5 ounces of dry vermouth, 3 to 5 pieces of fresh pineapple, 3 fresh rosemary sprigs, and .5 ounces of blood orange syrup.

You will want to build this cocktail by first muddling the rosemary sprigs and pineapple together. Once complete, go ahead and add every remaining ingredient to the cocktail shaker and fill with ice.

Next, shake the mixture for 10 to 15 seconds. Finally, strain the mixture into your preferred whiskey glass, and garnish the cocktail with an orange peel or rosemary sprig. At this point, the cocktail is considered complete and ready to be served.

Booker’s Bourbon is a dark and rich caramel color, almost teetering on the precipice of being more tan or brown than amber and golden in color.

Given the high proof rating of Booker’s Bourbon, the taster is most likely to experience strong alcohol levels initially. However, after that experience quickly subsides, the taster is left with wonderful floral and nutty notes supported by strong oak undertones.

Oddly enough, the tasting experience of such a high proof whiskey does not result in any invasive hints of alcohol burn. Brown sugar, raisin, and vanilla are the palate’s most prominent sensations upon initial tasting.

Booker’s Bourbon has a very long but mild finish that further enables the bourbon’s true quality to shine through.