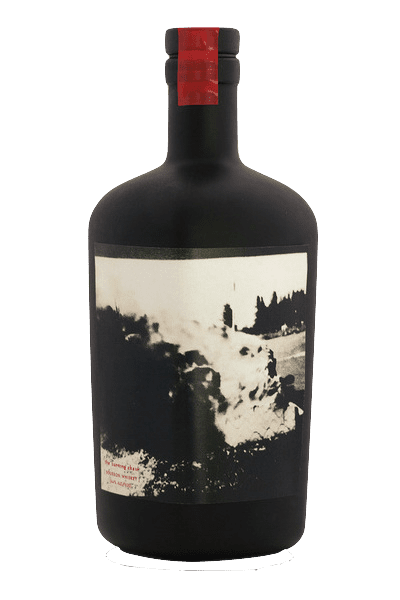 Although it’s a relatively low-volume brand compared to the big-name brands from Kentucky and Tennessee, Burning Chair Bourbon launched to positive reviews and nearly instantaneous name recognition — partly due to its connection to a big player in California’s wine scene.

Dave Phinney’s transition from the wine industry to the world of whiskey has led to this highly anticipated four-year-old bourbon. Finished in Napa Valley Cabernet barrels after primary maturing in the requisite charred new American oak barrels, this whiskey has an intriguing backstory, striking branding and well-executed media push that has made it a part of the conversation in craft bourbon circles in just a few years.

But how does it taste?

Welp, grab a glass. In this bourbon review, we’ll dive in to learn more about this brand, its background and how it’s made so you can be in the know.

This whiskey brand began in the world of wine.

Dave Phinney created a name for himself in Napa Valley’s wine circles. Among his successes, he launched the successful Prisoner line of wines — showcasing his knack for marketing vision.

In June 2022, Dave Phinney teamed up with NBA legend Scotty Pippen to release Digits Bourbon, which features a portrait of Pippen’s larger-than-life right hand on the label.

Although the Burning Chair brand does not use the terminology in its advertising or marketing, the brand’s approach to whiskey making is similar to the vatting house concept that was popular in the United Kingdom during the 20th century.

Social clubs like the Scotch Whisky Society buy single casks from the 150 distilleries throughout Scotland. Sometimes, these clubs marry — or vat — portions or entire casks into blends that they would either re-cask for to marry various spirits or bottle for unique single-cask products.

The Savage & Cooke Distillery boasts the use of local grains during production. Here we should mention that the barrels sourced for Burning Chair were distilled off-site in Kentucky, Indiana and Tennessee. And although we can’t rule out a supplier in, say, Bourbon County, Kentucky, trucked in California grains, it seems unlikely. While they are using local grains to produce whiskeys on-site in California, those barrels haven’t matured enough to make it into today’s bottle of Burning Chair 4-Year-Old Bourbon — although that might change as those stocks come of age.

We should point out an area of potential confusion to whiskey drinkers. While Burning Chair is a blend of bourbons — produced at different sites across the United States — it is not required to be labeled as a blended whiskey. Bourbon producers can blend as many barrels as they’d like into any batch. As long as they all adhere to the at least 51 percent corn requirement, the finished product may be labeled as bourbon.

The whiskeys blended to produce toady’s Burning Chair were not distilled at the California distillery. Instead, they were produced by large contract producers in Kentucky, Tennessee and Indiana. Some craft adherents may argue that this makes them unauthentic. But they do make some damned good whiskey in those states — and Burning Chair is proof.

The Savage & Cooke Distillery has a production rate of about 160 barrels per month. The first new make whiskey would’ve come off the line about 2018, making it just about eligible to meet the Burning Chair brand’s 4-year bourbon age statement. Although current packaging does not reflect whiskey distilled in California, bourbon fans should keep an eye out for updated language should barrels start being added to the blend in the coming years.

The Savage & Cooke Distillery boasts a natural wellspring that can pump 30 gallons of water per minute. A high-quality water source is valuable real estate to a distiller, showing keen utilization of the former naval yard space.

Water is a crucial ingredient of whiskey that has an enormous impact on all production phases — mashing, fermentation, distillation, maturation and final bottling. And spring water from natural sources often contain alkaline, pH and mineral qualities from filtration through natural rock formations.

Water is added to the milled grain to create a mash, and the influence of mineral water creates an ideal environment for introducing yeast to create alcohol during fermentation. In addition, distillers love utilizing spring water during fermentation and distillation because it often maintains a more-or-less constant temperature throughout all four seasons — generally about 55 or 60 degrees Fahrenheit — offering consistency when running the equipment regardless of the weather.

Bourbon can be distilled to an aggregate proof of no more than 150 degrees but cannot be placed into the barrel above 125 proof. So, a vital ingredient is the water source used to dilute the newmake spirit to barrel proof. This water will spend years in the barrel with the spirit and will leave it as whiskey — the combined oxidation, barrel char and red layer filtration, and other chemical processes having done their duty to alter the contents into the brown, flavorful spirit we all recognize as bourbon. Properties of the water impact the way aromas, flavors and color compounds are produced over the years and can impart substantial mouthfeel to the finished product.

The whiskey bottled for current expressions of Burning Chair was not distilled on-site but sourced from contract producers before being dumped and blended in California. However, the final stage — diluting and bottling the mature bourbon — occurs at the Savage & Cooke site. Bourbon typically leaves the barrel at anywhere from 100 to 130 proof – with entry proof combined with micro-environmental factors like temperature, barometric pressure and humidity to determine whether the spirit gains or loses strength in the barrel as a result of the losing the angels’ share.

Once dumped, the water source again plays a huge role in taking that ~120-proof barrel-proof whiskey down to the 88 degrees bottling-proof at which Burning Chair is offered. A considerable portion of the pour in your glass can be water, so the quality of that source is of utmost importance to the final product. A tear sheet for the brand highlights “pristine water from Dave’s high elevation property in Alexander Valley in Northern California.”

All of the whiskeys produced at the Savage & Cooke Distillery are matured or finished in ex-wine barrels from Phinney’s extensive Napa Valley wine operations. Burning Chair Bourbon is finished in Cabernet wine barrels formerly used for wine production.

Burning Chair is produced by the Savage & Cooke Distillery, owned by Napa Valley wine producer Dave Phinney and investors. Burning Chair Bourbon retails at about $57 for a 750mL bottle at 88-proof, or 44 percent alcohol by volume.

Although it’s a bit pricy, Dave Phinney’s four-year-old bourbon is delicious. A surprisingly smooth bourbon, maturation in Cabernet Sauvignon barrels adds just the right amount of complexity and doesn’t hit you over the head like many barrel-finished craft products.

With loads of vanilla bean, creamy caramel notes and plenty of oak finish — this product is worth a try by any bourbon fanatic looking to try new products.

In the glass, Burning Chair Bourbon has thick legs at 88-proof, a deep gold hue and a tawny color.