Today, we’ll take a look at a whiskey that may fly under the radar in some American whiskey circles — George Dickel Tennessee Whisky No. 12.

Tennessee whiskey is an intriguing sub-category of American whiskey that shares many traits with bourbon but has some unique attributes of its own. In this whiskey review, we’ll take a look at this affordable whiskey that punches way out of its price range.

The George Dickel story is that of an immigrant to the new world who made a name for himself as an entrepreneur.

George Dickel was born in Grünberg, Germany, in 1818. He moved to the United States in 1844 as a young man and ended up among a thriving German community in Nashville, Tennessee. His line of work — cobbler.

It might surprise you that Dickel was not actually a distiller. But he is one of many recognizable names familiar to whiskey fans today because of innovations made in the wholesaling business. Johnnie Walker, William Teacher and John Dewar are other examples of international brands that celebrate founders who distilled nary a drop of spirits.

George Dickel didn’t get his start in the booze business until after the Civil War, when Reconstruction offered savvy businesspeople opportunities in the industrialization of the Southern economy.

In 1865, he opened a wine and spirits shop, began blending whiskey and started wholesaling alcoholic beverages. In addition to whiskey, he traded in local German-style beers, traditional Dutch jenever, malted whiskeys from Scotland and Ireland, cognac and champagne from France, wines and brandies from all over Europe and other fashionable drinks. By dealing with this wide range of liquid goods, Dickel built quite a refined nose and palate. He soon recognized the quality of a nearby local distillery called Cascade Creek, which made ‘copper distilled sour mash whiskies,’ which he advertised as ‘mellow as moonlight’ in local newspapers.

The brand continued to grow in popularity after Dickel’s death in 1984. But production came to a crashing halt in 1910. In that year, Tennessee lawmakers halted the manufacture and sale of alcoholic beverages in the state — a precursor to the national Prohibition amendment enacted a decade later.

The site of the mothballed Cascade Hollow Distillery was neglected until 1958 when a new plant was built near the original site.

The mash bill is the list of grain ingredients used during the fermentation process. George Dickel has a mash bill of 84 percent corn, 8 percent rye and 8 percent malted barley.

While the label calls each a ‘recipe,’ the mash bill is uniform for all products. Here, the recipe actually refers to maturation.

There are a few product attributes common to Tennessee Whiskey that we should consider.

First is the term ‘Sour Mash Whisky.’ The sour mash process describes a practice whiskey makers utilize to help promote fermentation by using a portion of the terminal beer to start the next batch of mash. Many of us have become familiar with the idea of a sourdough starter to promote bread fermentation. Think of this as the same practice — but for brewing the beer that will be distilled into whiskey!

Next, let’s look at the Lincoln County Process. This term describes a practice unique to Tennessee whiskey-making — and is required by the state for nearly all1 products that carry the term ‘Tennessee whiskey’ on the label. To perform this charcoal mellowing process, distillers filter the clear new make spirit through layers of sugar maple charcoal before filling the oak barrels for maturation. This acts to remove some congeners, esters, fusel alcohols, and other impurities from the unaged spirit and imparts a unique character to the flavor profile of the finished product.

George Dickel Cascade Hollow Distillery pulls water from the nearby Cascade Spring. Limestone filtered water is renowned in whiskey making for the properties it imbues both during fermentation and when diluting the matured whiskey to bottling strength. Limestone acts as a natural filter for impurities such as iron — which can turn matured whiskey black upon contact — has alkalinity and acidity profiles that positively affect yeast during fermentation and imparts a minerality that improves the flavor of the finished spirit.

A look at the label will see the terms ‘small batch’ and ‘handcrafted.’ While each sounds nice as a marketing claim, they do not hold much significance as far as the U.S. Tobacco and Alcohol Tax and Trade Bureau (TTB) is concerned. A ‘small-batch handcrafted whisky’ is no different than any other product from a consumer-protection standpoint. Some customers have even [pushed back on these types of claims.] Understanding their use goes a long way towards becoming a nuanced bourbon enthusiast.

George Dickel is chilled before being passed through layers of sugar maple charcoal, then poured into charred new American oak barrels to mature.

In marketing materials, the brand claims each product is aged to taste — the No. 12 is aged longer than the No. 8. The No. 1 is unaged ‘white dog’ whiskey. Because each is distilled from the same mash bill, we must assume the recipe is the act the blending team uses to allocate barrels for each expression.

The George Dickel brand was acquired by worldwide spirits giant Diageo in 1964.

Today, whiskey is produced at the George Dickel distillery in Tullahoma, Tennessee. It is the second-largest whiskey production facility in the state but is greatly shadowed by the Jack Daniel’s Distillery in nearby Lynchburg — which is by far the largest distillery in the United States.

For decades it represented the company’s entire effort in U.S. whiskey production.

George Dickel Tennessee Whisky Superior No. 12 Recipe can be found for about $17 for a 750mL bottle at 90 proof, or 45 percent alcohol by volume. It is available primarily in the United States and is on a relatively small allocation. Its price puts it at the very low end of the premium category.

1A few distillers, including Benjamin Prichard’s distillery, received a ‘grandfather’ exemption from the state because they had produced whiskey without the Lincoln County Process before the 2013 legislation was passed.

This whiskey has delicate legs at 90-proof and is deep gold in color.

A smooth finish, with lingering tobacco and mellow coffee and black pepper notes. 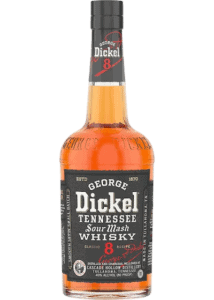