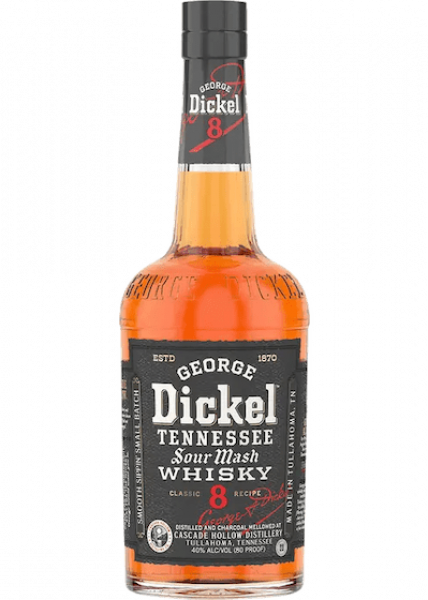 Today, we look at the ‘other’ Tennessee whiskey.

George Dickel No. 8 Recipe is a sour mash Tennessee whiskey that is matched up against Jack Daniel’s Old No. 7 in the same price range on whiskey shelves throughout the United States.

While the two have many similarities, George Dickel No. 8 is a product whose flavor profile is able to stand up on its own, offering a quality product in the standard pricing segment.

It is a great ‘gateway whiskey,’ with bold flavor and a reasonable price-point that entices new whiskey drinkers to the overall American whiskey category.

We won’t go too far into the historical origins of the Dickel brand because we already covered that in our review of George Dickel No. 12. Instead of beating a dead horse, let’s look at some more recent history.

Those who have spent time working in and around the bourbon industry know how incestuous — and sometimes contemptuous — the relationships can get between the major brands and spirits companies in Kentucky. And compared to the Kentucky bourbon scene, Tennessee is a much smaller pond that happens to house the largest fish in the world of American whiskey.

Today, these two brands fight a proxy battle in the war of distilled spirits supremacy between two global powers. So, it’s interesting that the George Dickel brand we recognize today started with a personal slight by the folks who made Jack Daniel’s.

After Prohibition ended in 1933, Cascade Hollow Bourbon was produced in Kentucky as one of the brands offered by the Schenley Industries liquor company based in New York City. They were perhaps the largest of the industrialized corporations tasked with quenching the nation’s thirst after 13 years of forced temperance.

In 1956, founder Lew Rosenstiel attempted to purchase the Jack Daniel’s brand for the Schenley portfolio. He was rebuffed, and the brand was instead sold to the Brown-Forman company.

So, Rosenstiel decided to bring the Cascade Hollow brand back to its Tennessee roots and build a brand new distillery 10 minutes away from the Jack Daniel’s facility. Spirit production began in 1958, and the first bottle of the rebranded George Dickel Tennessee Whiskey hit the shelves in 1964.

The mash bills for the various George Dickel’ recipes’ — including No. 1, No. 8 and No. 12 — are identical as far as we could determine. Like Jack Daniel’s and many traditional bourbons from Kentucky, George Dickel is a sour mash whiskey, which means that a portion of terminal beer is used to set the upcoming mash. This acts as an environmental starter for the upcoming batch. In addition to setting alkalinity and acidity conditions, microbial elements like active bacterial strains and terminal yeast contribute to the fermentation process.

George Dickel is produced at the George Dickel Cascade Hollow Distillery Co. in Tullahoma, Tennessee. The distillery was built in 1958 and utilizes modern distilling techniques, including its large column reflux still.

Cascade Hollow is the second-largest distillery in the state of Tennessee, behind Jack Daniel’s. But the Jack Daniel’s facility dwarves the smaller Dickel site. As the best-selling American whiskey brand in the world, Jack Daniel’s output is exponential compared to Dickel. Compare Jack’s six column stills — two measuring 72 inches in diameter and two 54 inches — to Dickel’s single 42-inch column.

The distillery uses spring water from nearby Cascade Springs, a limestone filtered water source that maintains constant temperature throughout the year. The brand makes mention of the cold water being the inspiration for the chilled maple charcoal mellowing approach. That claim may or may not be marketing copy. But from a production standpoint, anyone who has worked on a production team in a non-climate controlled distillery during a summer heatwave can tell you that water coming into the system at 50 to 55 degrees Fahrenheit is a whole lot more pleasant to work with than water coming in at 90 degrees or higher. That’s true for the production staff (shorter hours and self-regulation of internal temperature), the yeast (who prefer specific environmental conditions to maximize fermentation) and the equipment (that often utilizes water to cool fermentation tanks and, in the condensers, to turn alcohol vapors back into liquid).

What is the difference between Dickel 8 and 12? Time in the barrel.

Let’s talk about the term’ recipe.’ Dickel currently offers several products, named according to pricing tier: No. 1 recipe, No. 8 recipe and No. 12 recipe.

The use of numbers on labels is a tried and true practice in whiskey marketing. In the case of George Dickel, these differences are described as recipes. But it may be easier to think in terms of maturation, which may be confusing to the newcomer to the American whiskey category.

The No. 1 recipe is an unaged white dog or newmake spirit. Production in the United States requires maturation in oak barrels to use the term ‘whiskey,’ so this product likely touches or ‘rests’ in oak for the briefest of moments before being bottled.

The No. 8 recipe is the next step up, both in terms of aging and price. This product is a NAS — non-age statement — product, but it is safe to say it is over four years old. The blending team likely tastes through inventory and tags barrels that ‘taste’ like they belong in a No. 8 blend. A well-groomed blender can give you an approximate age of a barrel without looking at the fill date.

The No. 12 recipe is the top ‘recipe’ on the ladder. Also an NAS, the barrels picked for No. 12 have been aged longer than No. 8. Barrels are most likely chosen from the blenders’ favorite ‘sweet spots’ located throughout the warehouse facilities.

Tennessee whiskey is required by state law to be produced using the Lincoln County Process. Before going into the barrel, the clear distillate is run through about 10 feet of sugar maple charcoal. Dickel chills their newmake spirit before racking it into barrels — as alluded to on the label by the words’ chill filtered.’ This is a different process than in bourbon or scotch production, in which the matured whiskey is chilled to freezing temperatures and then filtered for clarity before being diluted to bottling strength to prevent ‘chill haze’ when the spirit is frozen.

The George Dickel brand and Cascade Hollow Distillery are owned and operated by Diageo, LLC – the biggest international distilled spirits producer on the planet.

Dickel is still suffering from a barrel inventory shortage caused by the disruption of whiskey production on the Cascade Hollow site from 1999 to 2003. They pulled No. 8 from stores for a few years in the middle of the decade because of barrel shortages. During this time, a limited Cascade Hollow Recipe was available to customers as a stop-gap product.

In the glass, George Dickel No. 8 has a light-golden hue and moderate legs at 80-proof.