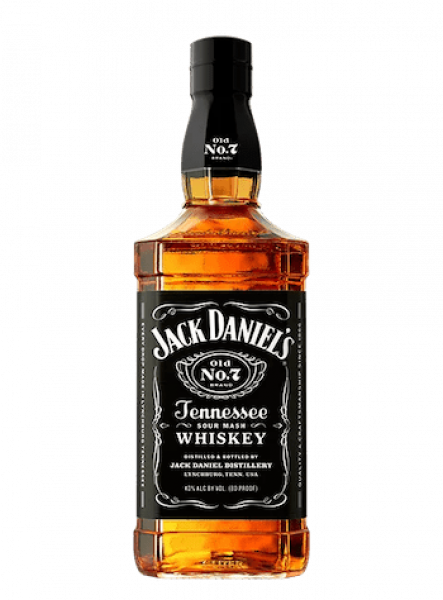 If you haven’t tried Jack Daniel’s Tennessee Whiskey, you are either a newcomer to the American whiskey category — or actively avoiding it.

Jack Daniel’s is the No. 1 selling American whiskey by volume both domestically in the United States and on the international marketplace. Only the Johnnie Walker brand of blended Scotch sells more units of whiskey worldwide. In fact, for many Americans, their first taste of whiskey is a shot of Jack Daniel’s.

But it’s worth exploring how Jack Daniel’s got here. You don’t become the No. 1 brand of American whiskey in the world by accident. And for devout whiskey fans, it’s worth exploring its unique flavor attributes to discover how it holds up in the glass neat, or on the rocks.

In this Jack Daniel’s Old No. 7 whiskey review, we will explore all of the things that make an order of ‘Jack’ one of the most recognizable bar calls on the planet.

Jack Daniel’s path to market dominance did not happen overnight.

In 1875, a young distiller named Jack Daniel founded a distillery in Moore County, Tennessee. This was before the invention of modern continuous distillation techniques. As a result, mass production was troublesome, and quality varied widely from batch to batch. As a means of quality control, Jack Daniel contributed two innovations to the world of American whiskey — the sour batch process and the Lincoln County process of charcoal filtration. We’ll explore each of these production processes in subsequent sections.

Many Tennessee whiskey fans will have heard Nearest Green’s story — a former slave who taught Jack Daniel everything he knew about whiskey’s fermentation and distillation. In addition to being a centerpiece of the brand’s origin story, they have recently spun off a whiskey expression under the name Uncle Nearest.

Prohibition disrupted production between 1919 and 1933. Afterward, Jack Daniel’s came back online but remained a regional player until the spirits producer Brown-Forman Corporation purchased the brand in 1956. With their backing, the brand’s iconic Old No. 7 black label became a regular staple of music venues and barrooms across the country and, eventually, the world.

Would a bourbon by any other name smell — and taste — as sweet? Of course, it would!

The ‘Bourbon’ category, as defined by the United States Alcohol & Tobacco Trade Bureau — lovingly known as the TTB within the industry — requires that any product with that distinction on the label must live up to specific criteria. Requirements include fermentation with a Mashbill — or grain ingredient list — with no less than 51 percent corn. Bourbons must also be aged for at least two years in new American oak barrels.

Tennessee whiskey is an awfully close relative of bourbon. The exact same mash requirements of bourbon are also placed on Tennessee whiskey. Jack Daniel’s actually lives up to all government requirements to call its product a Bourbon whiskey — and they could do so if they chose. But the leadership at Jack Daniel’s decided to forego the word bourbon in favor of the term ‘Tennessee Whiskey’ on the label.

Why? The answer is both a clever bit of marketing and a unique production attribute. We’ll explore more in the next section — Production Techniques.

The Lincoln County Process is the name of the charcoal mellowing method pioneered by Jack Daniel’s that helps make Tennessee whiskey a distinct spirits category.

By legal definition, to place the words ‘Tennessee Whiskey’ on a bottle’s label, the spirit inside must be made to the same bourbon standards — but with some additional caveats. The spirit must be distilled, aged and bottled in the state of Tennessee and must undergo the Lincoln County Process.

The Lincoln County Process is unique to Tennessee whiskey. It describes an extra step of sugar maple charcoal mellowing that whiskey makers perform before racking the unaged spirit into barrels for maturation.

All whiskey comes off the still as clear ‘white dog’ or ‘newmake’ spirit. It is only the aging process in wood barrels that gives whiskey its golden or amber color, along with the vanilla and baking spice aroma and flavors familiar to all bourbon lovers.

Jack Daniel’s — and other brands that use the term Tennessee whiskey on their label — run their spirit through layers of sugar maple charcoal before placing it into barrels to mature. This gives the spirit a distinct yet nuanced flavor that cannot be found in most bourbons.

To accomplish this, Jack Daniel’s fires giant stacks of timber to make their maple wood charcoal on site. It’s actually quite impressive.

It’s also interesting that Jack Daniel’s is made in a dry county. Moore County, where the distillery is located, never got over Prohibition. As a result, it continues to disallow alcohol sales within the county. But if you plan a trip to the distillery’s visitor center, don’t worry. The state does allow tastings and bottle sales on-site after tours.

It should also be noted that owner Brown-Forman controls its own cooperage. It is one of the only major spirits producers to own this part of the supply chain. By making their own barrels, they can control the quality and consistency of the resulting whiskey down to the finest detail. This gives the distillers and blending team more control over the finished product.

Jack Daniel’s unique flavor profile — and instant name recognition — have led to some cocktail staples that are almost as well known as their namesake.

The Jack & Coke is such a well-known bar call that you might be able to order this drink in nearly every country that allows alcohol consumption — whether the bartender speaks English or not!

Fill a highball glass with ice. Pour Jack Daniel’s Tennessee Whiskey over ice. Add Sours and Triple Sec and stir with a swizzle stick. Top with soda and garnish with a Lemon wedge. Refreshing!

In the glass, Jack Daniel’s Tennessee Whiskey has a golden-amber color.

Oak and charcoal, with hints of pine and a buttery caramel aroma.

A spicy pepper flavor, with notes of clove.