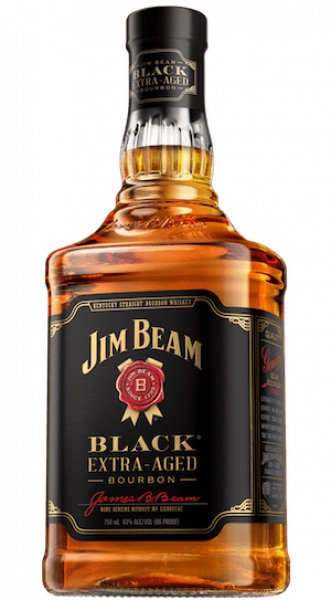 Those accustomed to the flavor of Jim Beam white label might be looking to explore further and wonder, ‘Why does Jim Beam Black taste different than white label — and why does it cost more?’

In this review, we’ll demystify what’s in the bottle so you know exactly the bang you’re getting for your buck!

The Böhm ( later Anglicized to ‘Beam’) family emigrated from Germany to make a home in the American frontier of the 18th century. They were among the first waves of settlers into what was then called the Kentucky County of Virginia in the 1780s. Then, in 1792, Kentucky split with Virginia to create its own state.

The Beam family started distilling whiskey in 1795, a fact highlighted on each bottle sold today. Distillers in the region continued the tradition of distilling excess grain from each harvest into whiskey — a shelf-stable commodity that was even substituted for hard currency along the frontier during the nation’s infancy.

The brand’s namesake James ‘Jim’ Beauregard Beam took over operations at the distillery in 1894. At the time, the distillery had begun to offer bourbon marketed as ‘Old Tub’ in glass bottles — which James B. Beam grew as a regional brand. Then, the 18th Amendment to the U.S. Constitution, which outlawed the production and sale of alcoholic beverages, was ratified in 1919. Prohibition left a wake of destruction through Kentucky bourbon country and America’s alcoholic beverage industry as a whole.

These years were lean for James B. Beam. A riotous temperance mob burned down the Beam family distillery and barrel warehouses and he was forced to work in a quarry. Prohibition lasted through 1933, and after a decade and a half of breaking rocks in the hot sun, Jim Beam began to rebuild the family’s bourbon legacy.

Jim Beam Bourbon grew as a regional and then national brand in the boom following World War II. And during the 1960s and 70s, the brand began to diversify with other product offerings. During this time, customers were first introduced to Beam’s Black Label — launched with an 8-year age statement that claimed to double the 4-year maturation of traditional Jim Beam white label.

Jim Beam Black Label uses the same mash bill or grain recipe as the white label and other expressions from the brand family.

Both Jim Beam Black and white label are considered Non-Age Statement (NAS) bourbons. Neither product prints a number of years on the label to denote how long the liquid has been aged in barrels.

When Jim Beam Black was first introduced as Beam’s Black Label in the 1970s and 80s, it was released as an 8-year-old whiskey that was ‘double aged’ from the four years the white label bottle offered. But in 2014, Jim Beam removed the ‘double aged’ and 8-year terminology from the label to produce a NAS product with a similar flavor profile. The term ‘Extra Aged’ was added in place of the double aged claim.

Jim Beam is a product of Beam Suntory.

Based in Japan, Suntory is the third-largest spirits producer in the world behind the U.K.’s Diageo and France’s Pernod Ricard. Suntory whiskey is one of the best-selling brands in Asia. You may recognize the name from the 2003 movie ‘Lost in Translation’ with Bill Murray and Scarlet Johansson.

In 2014, Suntory acquired the Chicago-based Beam Inc. The merged Beam Suntory stateside operation is headquartered in Chicago, with a planned move to New York City in upcoming years.

Look at the Label

Because we already took a look at much of the distillation and production techniques in our recent Jim Beam Black vs. White Label post, let’s take some time to look at that black label.

Knowing how to read a whiskey label is an essential step in any casual whiskey fan becoming a nuanced bourbon aficionado. There can be a lot of text on any given bourbon label, so learning how to separate the marketing copy from regulated product claims will allow you to make savvy purchases — at any price range.

Jim Beam Black Extra Aged Bourbon — This claim was likely created to replace the ‘Double-Aged’ terminology that accompanied the brand before the 8-year age statement was removed in 2014. While an age statement is commendable because it is regulated by the U.S. Tobacco and Alcohol Tax and Trade Bureau — or TTB — it is not the only determiner of quality. Consider the numerous massive rickhouses that Jim Beam has access to over its two production sites in Frankfurt and Clermont, Kentucky. These multi-story wooded warehouses are non-climate controlled and hold a variety of micro-climates between them. By picking the best barrels from the sweet spots sprinkled throughout these facilities, the experienced blending team can pull together unique expressions with entirely different flavor profiles than barrels resting elsewhere in the facility.

Kentucky Straight Bourbon Whiskey — This terminology is found on most nationally distributed, well-established brands coming out of Kentucky. To be labeled Whiskey, a product must be made of 100 percent grains, and Bourbon must be made with corn making up 51 percent of that grain. A Straight bourbon was aged for at least two years in new American charred oak barrels.

James B. Beam — None Genuine Without My Signature — This text appears on most bourbon offerings under the Jim Beam banner. It harks back to the brand’s namesake and fifth-generation distiller, who helped build the brand into an established brand when he took over the company in 1894.

There is an entire Legacy paragraph of copy that gives an interesting look into this brand extension’s evolution over the decades. When it was first released, Beam’s Black Label was likely partially envisioned as a competitor for Jack Daniel’s Tennessee Whiskey. So the call-out about the “extra time” in “Charred White Oak Barrels” may be a hold-over from those early head-to-head days taking on Jack, which promotes the Lincoln County process of maple charcoal filtration. Or not. But we thought it worth pondering.

World’s Highest Rated Bourbon — The particular bottle we reviewed had an attractive medallion from the International Wine & Spirit Competition. There are a lot of wine and spirits award competitions out there. But the IWSC is arguably one of the most influential in actually moving the needing on sales volume and value — along with a rating in Jim Murray’s Whiskey Bible or the World Whiskey Awards. Jim Beam Black won the gold outstanding along with the overall bourbon trophy in 2016, along with silver outstanding medals in 2014, 2017 and 2018. In addition to being a fascinating bit of industry news, the judges left us quite a delightful tasting note with the award: “Seriously dusty, warehouse. A workman drinking coffee after newly pouring black top in Manhattan. In the mouth, cherry drops and coffee on the Highline overlooking the Hudson, as winter rolls in. Sweet sugars and rum notes on the finish.”

Man, our tasting note has a tough act to follow…

Jim Beam Black can be found for about $24. It is bottled at 86-proof, or 43 percent alcohol by volume — which is six proof-points higher than the standard white label.

In the glass, Jim Beam Black has the deep gold color of dark chestnut. Its legs are healthy at 86-proof.

A lingering corn sweetness, with vanilla, caramel and raisin.