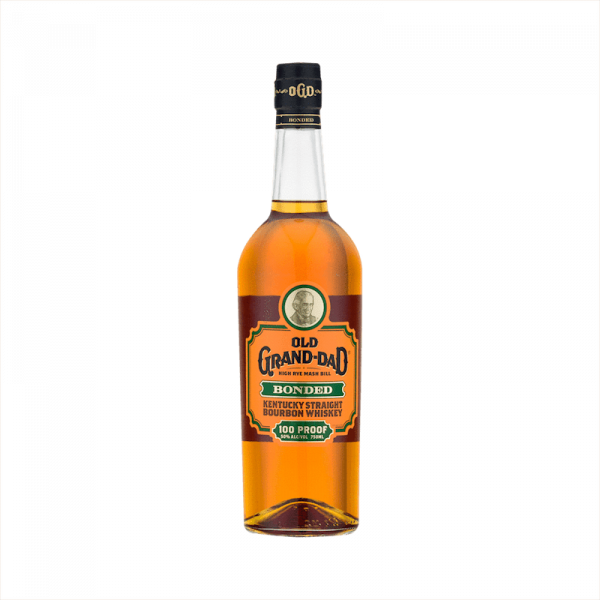 Every bottle of Old Grand-Dad Bonded is a trip into the past.

In this post, we hope to paint a picture of why this beloved bourbon has enjoyed a level of staying power other brands dream about. Not only does it continue to pull in bourbon fanatics with its nostalgic charm, that iconic orange label still has the power to demand respect from new drinkers.

At first glance, you might assume the liquid inside that ‘bargain bin’ bottle behind the bar might taste unrefined. But once you pour a glass and experience the bold, yet surprisingly refined, flavor profile, you might understand why this bottom shelf bourbon brand holds a special place in the hearts of bourbon drinking aficionados everywhere.

Meredith Basil Hayden was an early settler, farmer and distiller. He was among the many English Catholics who moved to the new world to escape prosecution from the ascendant Protestant movement in the United Kingdom. He originally emigrated to Maryland before moving on the frontier of Kentucky in 1796.

By 1882, Raymond B. Hayden — Basil Hayden’s grandson — expanded the family’s distilling business and built a large-scale plant near the new railroad. He called the distillery Old Grand-Dad in honor of his grandfather, the family’s first distiller.

When Raymond died in 1888, the operation was sold to the Wathen family, who operated the distillery until Prohibition put the brakes on all alcohol production in the United States in 1920. Following Prohibition in 1933, Old Grand-Dad was produced by National Distillers Products Corporation. It was acquired by Jim Beam in 1987.

Today, we’re looking at Old Grand-Dad Bonded, which gives us an excellent opportunity to look at the Bottled-in-Bond Act of 1897. This is great because this underappreciated legislation was the first consumer protection law in United States history!

The Bottled-in-Bond Act came about because of the sketchy practices of 19th-century whiskey merchants.

Today, we enjoy several well-defined spirits categories. If we see a ‘straight bourbon whiskey’ on the shelf, for example, we know that it was aged in a new charred oak barrel for at least two years and that the mash bill contained at least 51 percent corn.

But in the mid-19th century, customers had no idea what was inside a bottle of ‘whiskey’ or ‘rye’ or ‘bourbon.’ There were no regulations to differentiate a bottle made from 100 percent corn and matured in new oak from a bottle of a mix of ‘moonshine’ style grain-and-sugar mash that was unaged but colored with tobacco.

So, the government created the program with the help and guidance of Colonel Edmund Haynes Taylor, Jr., who championed the act and got most of the big distillers in Kentucky, Pennsylvania and Maryland on board. Now, when a customer buys a bottled-in-bond bourbon, they know exactly what is inside the bottle.

For decades after Prohibition, Old Grand-Dad Bonded was the No. 1 selling bonded whiskey on the American market. Today, large bourbon brands and small craft distillers are embracing the bonded route as customers begin to learn more about this historical style of whiskey making.

But Old Grand-Dad serves as an example of how bonded whiskeys used to taste. Short of finding a time machine to the 1800s, this is an excellent example of what a heritage pre-Prohibition whiskey brand had to offer in terms of flavor. For that reason, a new generation of craft bartenders and mixologists are learning why Old Grand-Dad Bonded Bourbon offers a profitable opportunity to create new flavor profiles using a well-respected but reasonably priced throw-back bourbon brand.

For example, Old Grand-Dad Bonded vs. Wild Turkey 101 is something that might show up as a topic on the r/bourbon sub-Reddit or any number of the bourbon review sites and social media groups that exist online. When comparing these brands side-by-side, consider Old Grand-Dad’s 27 percent rye content to Wild Turkey’s 13 percent.

This brings up our next point.

Despite the ‘High-Rye’ branding on the Wild Turkey bottle, it has what many bourbon geeks might consider a ‘traditional’ bourbon recipe. Remember that terms like ‘wheated,’ ‘high-rye’ and ‘traditional’ are not regulated terms. So, whiskey producers can use them on any bourbon bottle regardless of the mash bill’s specific proportion of wheat, rye or corn, respectively.

Old Grand-Dad has the same mash bill as the higher-end Basil Hayden’s bourbon, aged for about eight years and bottled at 80-proof.

Old Grand-Dad Bonded Bourbon is produced at the Jim Beam Distillery in Clermont, Kentucky. It is made using the facility’s 72-inch column still.

Because Old Grand-Dad and Basil Hayden’s bourbons are both made from the same mash bill, Beam Suntory likely mashes and distills what we’ll call the ‘Grand-Dad’ recipe and lays down barrels for both whiskey brands during the same runs.

Old Grand-Dad Bonded Bourbon is produced as a ‘bonded’ whiskey, which means that the production and maturation processes are narrowly defined.

What does the term ‘bonded’ mean?

According to the Bottled in Bond Act of 1897, whiskey makers can use the terms ‘Bonded’ or ‘Bottled in Bond’ on the label if they adhere to a specific quality standard. To be considered a bonded bourbon, the product must adhere to the general standards of identity for bourbon but also must be matured in a government-bonded warehouse for four years. All the barrels used for the blend must have been distilled under the same roof during one distilling season, and it must be bottled at exactly 100-proof, or 50 percent alcohol by volume.

In the past, government-bonded warehouses were centrally administered maturation facilities in which federal agents held lock-and-key. But today, the government will bond warehouses on the premises of distilleries so that the barrels do not have to travel off-campus to be considered bonded. Distilling seasons are January through June or July through December.

Old Grand-Dad is produced by Beam Suntory, the world’s No. 3 distilled spirits producer on the planet.

Because Old Grand-Dad 80-proof, Old Grand-Dad Bonded, Old Grand-Dad 114-proof and Basil Hayden’s bourbons all come from the same mash bill, it offers us the opportunity to do a side-by-side comparison based on proof gallons.

Proof gallons are a concept that the U.S. Government uses to determine taxes on distilled and maturing spirits. This metric allows record-keepers to compare a product like wine — which is bottled at about 15 percent ABV — with a bourbon bottled at 50 percent ABV. If, for example, tax rates need to know the volume of ‘booze’ being produced — rather than the volume of liquid — comparing proof gallons will give an exact measure across liquids with drastically different alcohol contents.

We wondered, which product is the best deal based on a proof-gallon basis? So, we put them in a head-to-head comparison to find out.

Is this an interesting comparison? Maybe.

Does it help the average shopper while out bourbon hunting? Probably not.

And is our methodology1 accurate? Mmmmn… Very suspect!

But what this comparison does help illustrate is the importance of maturation. As Non-Age Statement bourbons, both the 80-proof and 114-proof versions are similar in price. At 4 years, the Bonded is the next bourbon up the pricing ladder. And Basil Hayden’s — which is not only aged for about twice as long as the bonded version but also reflects a more premium brand offering with high-end packaging and the marketing spend to boot — costs about twice as much at retail as the most expensive Old Grand-Dad bottling.

In the glass, Old Grand-Dad bonded has pronounced legs at 100-proof. It is tawny in color with a copper hue.

Charred oak and cracked peppercorn, with almonds, honey and toffee.

Leather, tobacco with chocolate cinnamon and a bit of clove. 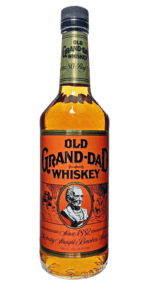