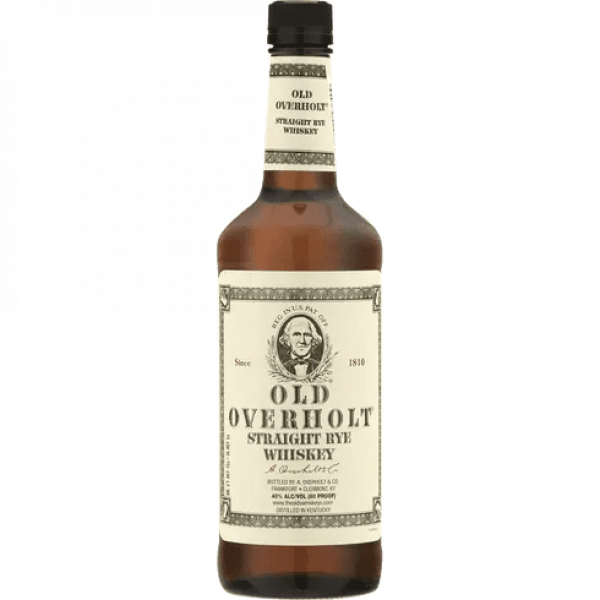 Old Overholt Straight Rye Whiskey holds historical significance as the nation’s oldest continuously distributed American rye whiskey product on the market. But for way too long, the distinct rye notes contained in each bottle were a vestige of a bygone and largely forgotten method of whiskey production in America.

During today’s whiskey renaissance, even your die-hard bourbon enthusiast has an appreciation for America’s rye whiskey tradition. But for a time during whiskey’s dark period of the 1970s and 80s, Old Overholt was the only nationally distributed Rye whiskey available in the U.S. For that reason alone, it should hold a special place in the canon of American whiskey brands.

Today’s craft movement has seen Rye whiskey grabbing the attention of whiskey nerds across the globe. And a new generation of drinkers are learning how Old Overholt’s rye flavors offer a great introduction to the category at a price range that allows for experimentation — without taking a toll on your pocketbook.

So, let’s dive right in and learn more about this underappreciated heritage brand.

The year was 1800, and Western Pennsylvania is the frontier of a newly forged nation. Among the early settlers to this dangerous, mountainous region was the Overhold (anglicized: Overholt) family.

The Overholts emigrated to the United States from Germany and were among the ‘Pennsylvania Dutch’ or Mennonite residents who plowed those first farms throughout Pennsylvania. The family’s ancestral home was the Nordhausen region of Germany, which to this day is renowned for the production of Korn – aka Kornbrand or Kornbranntwein. This traditional spirit shares production techniques that reflect early whiskey production in the United States.

We digress here for a short homage to the German influence on American whiskey — an oft underappreciated source of inspiration. It’s easier to celebrate the influences of Scottish and Irish immigrants on today’s American whiskey traditions because both countries have well-defined, world-recognized whiskey industries. But German immigrants have had as large an impact on what Americans drink today as perhaps any other group. When you consider that most cultures harvest what they grow, and ferment whatever they harvest but can’t eat, then distill what they brew and can’t drink — well, it’s no wonder the strong beer brewing traditions of Germany live on in our distilled spirits as well as our pilsners, dunkels, lagers and hefeweizens.

In 1803, Henry Overholt built the family’s first still on their plot of land in West Overton, near modern-day Connellsville, Pennsylvania. His son, Abraham, took over operations in 1810 and over the next 50 years the family built out the distilling capacity and increased output. By 1860, the site operated one of the largest distilling operations in the country.

Old Overholt was one of the foremost examples of Monongahela rye whiskey — a forbearer of Kentucky bourbon and one of the most recognized spirit categories before Prohibition.

When Abraham Overholt died in 1870, his grandson Henry Clay Frick took over distilling operations. It is at this point our story becomes a who’s who of industrialist capitalists. If the Frick name rings a bell, it is because he was one of the richest men in the country at the time. He owned one of the country’s most extensive coke operations — contributing to the Pittsburgh region’s rise as the world’s dominant steel producer. His partner in his distilling endeavor was Andrew Mellon, another well-known historical figure who was one of the wealthiest industrialists at the time.

Frick died in 1919 — one year before the 18th Amendment to the U.S. Constitution would disrupt the production and consumption of alcohol for over a decade. Mellon remained active in the company and, in 1921, was named Secretary of Treasury under President Warren G. Harding. While most distilleries were shut down by federal agents, a lucky few were able to operate under medicinal licenses. The Old Overholt distillery was one of those lucky distilleries to remain open.

But the brand’s powerful pedigree could not help it avoid the fate of most of the country’s other pre-Prohibition distillers. In 1932 — one year before the repeal of Prohibition — the company was sold to National Distillers. After Prohibition ended, a new generation of drinkers had lost their appreciation of Rye whiskey. By 1960, Old Overholt was the only nationally distributed brand of American rye whiskey on the marketplace. In 1987, the brand was acquired by Jim Beam Brands, and production moved to Kentucky.

Unlike most bourbon brands produced by Beam Suntory, the mash bills — or list of grain ingredients — for Old Overholt and other rye whiskey brands has not been made public.

To be labeled a Rye whiskey in the United States, the product must be produced from a mash bill of at least 51 percent rye grain.

If you are new to the rye whiskey category, you might be wondering — ‘What does rye whiskey taste like?’ Well, the easiest way to describe rye’s flavor is to contrast the spicy black pepper flavor of rye with bourbon’s sweet corn profile.

Old Overholt is produced by Beam Suntory, the third-largest distilled spirits producer on the planet. Beam Suntory was formed in 2014 when Suntory Holdings, based in Japan, acquired Beam Inc. and its portfolio of brands.

Old Overholt has a suggested retail price of about $20 for a 750mL bottle at 80-proof. Its pricing places it firmly in the standard segment tier, offering bartenders and whiskey fans an excellent opportunity to find out what rye whiskey tastes like for a very reasonable price. It is an excellent option for mixologists looking to find that classic rye spice flavor profile to use in cocktails such as the Manhattan, Sazerac and old fashioned.

In the glass, Old Overholt has a medium yellow hue, is deep copper in color and has fast legs at 80-proof with medium depth.