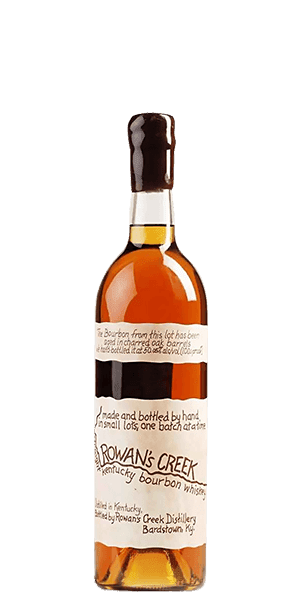 With its wine bottle design and the childlike ‘handwritten’ font face look on the label, Rowan’s Creek Bourbon stands out on a liquor shelf. It offers an intriguing option for those on the hunt for exotic bottles of bourbon. Although it does not have the same brand recognition as some of the other names on the crowded bourbon shelf, its ‘bonded style’ taste profile is something that bourbon aficionados often seek out.

The story of Willett begins in the years following the repeal of Prohibition. It includes over a hundred years of history — and a brand new distillery. The twists and turns are as pronounced as the bends of the Rowan’s Creek namesake stream that courses across the distillery.

John David Willett was born in 1841 and served as the master distiller for a distillery near Bardstown, Kentucky, until 1876. His son, Aloysius Lambert Willett, was born in 1883 and also went into the distilling profession. He later purchased the distillery and founded the Willett Distilling Company in 1936 — three years after the repeal of Prohibition. During the 1940s, the family-run distillery would take advantage of the post-Prohibition boom in bourbon sales to introduce the Old Bardstown Kentucky Straight Bourbon Whiskey brand. A few decades later, during the 1960s, the Johnny Drum Bourbon brand was introduced.

The narratives around many bourbon brands have a few common threads, one of which is the sales slump that hit the industry in the 1970s and 80s. Behind the popularity of James Bond’s shaken martini, clear spirits like gin and vodka became all the rage while bourbon and scotch became known as a ‘dad’s drink.’ As a result, sales volumes of bourbon and rye whiskey in the United States plummeted.

While some brands were able to weather the storm better than others, this period in bourbon history changed the fortunes of the Willett family dramatically.

Sensing the game was up on bourbon sales in the U.S., the leadership at the distillery decided to cease distilling bourbon to lease the equipment to producers of ethanol-based fuel alternative to gasoline during the height of the 1970s oil crisis. However, they continued to mature bourbon in their warehouses and bottle products as a non-distiller producer.

The ‘gasohol’ fuel product never panned as a consumer commodity. But the bourbon brands they launched found continued success.

From the 1980s into the new millennium, the outfit operated as a non-distiller producer and wholesaler under the name Kentucky Bourbon Distillers, Ltd. — KBD — under the management of Thompson Willett’s daughter Martha Harriet Willet and her husband Even G. Kulsveen. The couple continued to increase regional sales by launching the Small Batch Boutique Bourbon Collection, which included Noah’s Mill, Kentucky Vintage, Pure Kentucky and Rowan’s Creek —initially released with a 12-year age statement.

The company continued to take advantage of renewed interest surrounding the bourbon renaissance that began in the 1990s. They introduced brands under the namesake Willett brand name during the 2000s and into the 2010s. But as their distribution continued to grow, so did the strain on their avenues of sourcing. As the popularity of the Willett portfolio continued to grow, so did the number of competing NDPs producing quality products. About this time, the Rowan’s Creek age statement was removed from the label.

To shore up supply chain issues, the Willet Distillery began to produce its own whiskey again in 2012. An 24-inch continuous column system, cookers and fermenters and a brand new Vendome copper pot still were installed on the site.

Although it continues to be considered a craft distiller by the Kentucky Distiller’s Association, the site has the production capacity of other mid-range facilities recently opened in Kentucky, including Old Forester, Rabbit Hole, Castle & Key and New Riff.

Like all bourbon, Willet is required by law to have a mashbill or list of grain ingredients of at least 51 percent corn. The remaining 49 percent is up to the distiller’s discretion so long as it contains cereal grains.

Willett’s production team utilizes four bourbon grain bills to produce Rowan’s Creek whiskey and other brands. We will call these recipes Nos. 1 through 4:

Master Distiller Drew Kulsveen has said the wheated mash bill taking up a hefty share of the production schedule in recent years.

As barrels reach maturity and peak flavor, the blending team has a broad range of tastes to pull from when blending each batch.

Today, production occurs under the direction of fifth-generation master distiller Drew Kulsveen, grandson of Thompson Willett. He’s been positioned as a bit of a wunderkind within the Kentucky bourbon community.

The Willett Distillery re-opened in 2012. From the time the original stills went silent in the 1980s until the opening of the new facility, Rowan’s Creek was a sourced whiskey. Small batches of bourbon ranged in the numbers of barrels, mash bills contained in the batch and maturation durations meant bottles sampled throughout the years have varied more than the typical large brand.

Rowan’s Creek is considered a small batch bourbon. But with its new production equipment now online, the company has flipped the table. Willet and KDB can now utilize excess capacity to meet the sourcing requirements of other brands if they choose.

Willett does not disclose the barrel char levels used for the maturation of its whiskeys. This may reflect the long history of Kentucky Bourbon Distillers as an exporter, independent bottler, broker and non-distiller producer — or NDP.

In the past, KBD sourced the barrels for their brands — including Rowan’s Creek — from a variety of suppliers. The Heaven Hill Distillery is literally right down the road, but the company also sourced barrels from Jim Beam — who uses No. 4 barrels — or Four Roses — who uses both No. 3 and No. 4 barrels — whenever they became available. As a result, the blending team became adept at blending small batches of whiskey to create flavor profiles paired with each specific brand offering.

For years, Rowan’s Creek Bourbon was the No. 1 seller in volume sales for the entire Willet family of whiskeys, including Willett bourbon and rye whiskeys, Noah’s Mill and Bardstown bourbon brands. Check out some of the other products in the Willett portfolio.

Old Bardstown Bottled-in-Bond Bourbon costs about $22 for a 750mL bottle.

Rowan’s Creek Small Kentucky Straight Bourbon Whiskey retails for about $40 for a 750mL bottle at 100 proof.

It’s a family-owned bourbon brand that has produced enough whiskey to support near nationwide distribution.

At nearly $40 per 750 mL bottle, it has a lot of competition as a premium shelf bourbon. After all, brands like Knob Creek, Maker’s Mark and Four Roses Small Batch offer great products at arguably a better value. However, when you consider the Willett family’s unique whiskey-making history, this may be a case where the actual source of an NDP-turned-distiller is actually a fascinating selling attribute.

Rowan’s Creek is a tasty bourbon that can be enjoyed neat, with a couple ice cubes, in your favorite highball glass with some soda water, or in an old fashioned with a tablespoon of sugar and orange peel in the chilled glass.

In the glass, Rowan’s Creek Kentucky Straight Bourbon Whiskey has an amber color, with a light copper hue.

Cinnamon, vanilla and caramel, with a bit o’ honey.

A bit of black pepper spice, with cinnamon and vanilla.