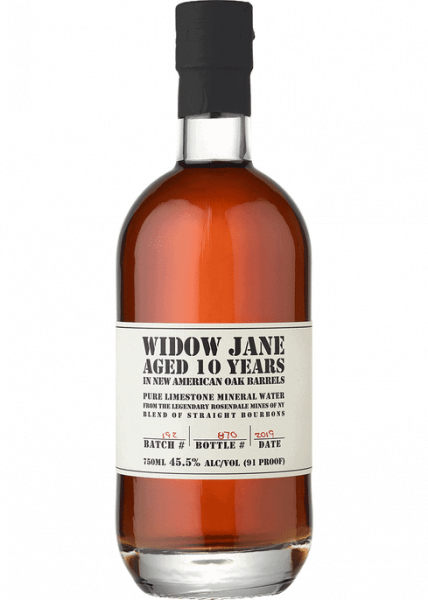 In this whiskey review, we’ll take a look at a bourbon that has generated a lot of buzz in the nine years or so since it was first launched — Widow Jane 10 Year Old Blend of Straight Bourbons.

It has an intriguing name and water pulled from some tough rock. But it has also generated a debate in the world of whiskey. If you’re considering purchasing this bottle of bourbon — which is priced in the super-premium range — it makes sense to do some research before taking the plunge. So, in this post, we’ll take a look at this product so you know exactly what you’re getting into before you pull the trigger.

This story starts with an eccentric entrepreneur with a shadowy background: Daniel Prieto Preston.

Preston was born in 1970. After that, his background is shrouded in mystery. By the 1990s he had started to become involved in several companies, some of which he launched. These businesses made scientific glass, parachutes and chocolate, there was a farming endeavor, an aerospace company and — most importantly — a distillery.

Widow Jane Bourbon was named for an underground limestone quarry of the same name. The limestone pulled from the historic site north of New York City was used in the construction of American icons like the Brooklyn Bridge, Washington Monument and Statue of Liberty.

The Widow Jane bourbon brand was launched in 2012. Things quickly got weird.

In March 2013, an article published on a local news site in Rosendale, where the historic Widow Jane limestone mine is located, published an article about the new whiskey. The Century House Historical Society, which maintains the historic mine, published comments under that article clarifying they had no affiliation with the bourbon brand.

This set off a bit of controversy within the bourbon enthusiast community.

Some bourbon fans called out the brand for using whiskey from an undisclosed distillery and for obfuscating the water source used to dilute the spirit. But despite these setbacks, the brand continued to grow in popularity and expanded its reach into additional markets. Today, it is available throughout the United States and in some international markets.

Widow Jane does not disclose its mash bill.

However, the 10-year offering is a blend of straight bourbons. Barrels are acquired on the secondary market from large distilleries in Kentucky, Indiana and Tennessee. We can’t know whether these barrels were fermented under contract. It is possible they each use the same recipe, but that is unlikely because the 10-year barrels would have been distilled before the founding of the Widow Jane brand. Most likely, they are a blend of various mash bills.

Since bourbon is required by law to contain 51 percent corn, we know that each of these barrels will have that in common.

Thanks to its age statement, we know each barrel used in the making of Widow Jane Bourbon was aged for no less than 10 years. Some of the barrels may have been aged longer.

Widow Jane does have a maturation facility. So, it is possible some of the barrels were aged for less than 10 years when they were purchased on the secondary market and brought to the rackhouse facility in Red Hook to mature.

Widow Jane does actively distill in its facility. While those barrels will not have been old enough to make it into the current 10-year blend — remember, it opened in 2012 — those barrels may eventually make it into future batches as they reach the maturation threshold.

The source of the dilution water is from the Widow Jane limestone mine that gives the brand its name.

Water filtered through limestone has been a key ingredient for whiskey makers from Scotland to Kentucky for centuries. When water is pulled from limestone aquifers or streams, the porous rock acts as a filter, removing iron and other impurities. Limestone water has improved pH, acidity and alkalinity, which helps the yeast thrive during fermentation. And finished whiskey diluted with this sweet water includes minerals that help with mouthfeel and improve taste.

Widow Jane’s unique product attribute is that the limestone aquifer they pull water from is a manmade cave created as a result of the limestone mining process during the 19th and early 20th centuries. In this case, rainwater made its way through the limestone into manmade cave under the earth.

In 2018, after a litigious battle between Preston and potential buyers, the Widow Jane brand was acquired by Samson & Surrey — a drinks marketing support and consulting firm based in Miami, Florida.

In addition to the 10 year old expression, the brand also offers the following bottlings:

Look at the Label

By looking at the label, we can decipher all kinds of information about the liquid inside the bottle. Let’s look to see what we can learn about this product.

Aged 10 Years — This 10-year age statement makes for quite a mature bottle by bourbon standards. An age statement on the label is regulated by the U.S. Tobacco and Alcohol Tax and Trade Bureau (TTB). By placing the age on the label, the distiller states the youngest barrel in the batch has been matured for at least 10 years in new American charred oak barrels.

Pure Limestone Mineral Water from the Legendary Rosendale Mines of NY — After the 2014 controversy surrounding its water source, Widow Jane clarified that while their brand had no connection with the historical society that preserves the site, they drew from a private well nearby that pulled from the same aquifer. Today, the brand seems to have come to an agreement with the Century House Historical Society. Widow Jane Bourbon has the following copy on their website: “We are extremely proud to partner with the Century House Historical Society who guard and promote the foundational history of the Mines and town of Rosendale.”

Batch / Bottle / Date — We must note that the bottle sampled for this review was from Batch #308, bottled in 2021. The term ‘small batch bourbon’ is not regulated by the TTB. Some brands may dump hundreds or thousands of barrels for each batch and still use that term on the label. But Widow Jane states it is comprised of 5-barrel batches. That’s an extremely small batch. Because only 5 barrels of bourbon are dumped, each batch will have slightly different characteristics based on the unique flavor profile of each component whiskey in the blend.

KY, TN, IN Bourbon Bottled by Widow Jane Distillery, Brooklyn, NY – Sometimes it’s not what you say, but what you don’t say… Part of the hullabaloo surrounding the launch of the brand revolved around claims of it being hand crafted in the Red Hook distillery, despite being distilled out of state. As the craft bourbon movement began gaining steam in the mid-2010s, some producers caught slack for not following TTB Rule 5.36(d), which requires the state in which the whiskey was distilled to be printed on the label. That issue seems to have been resolved if the bottle reviewed for this post is any indication.

Kosher – Those working in the New York City market know how important a Kosher sticker can be when trying to reach shelves within the metro area.

Widow Jane 10 Year Old Blend of Straight Bourbons retails for about $70 for a 750mL bottle. It is bottled at 91-proof, or 45.5 percent alcohol by volume.

Widow Jane 10 year is non-chill filtered, and in the glass has a red-brown mahogany color. It has moderate legs at 90-proof.