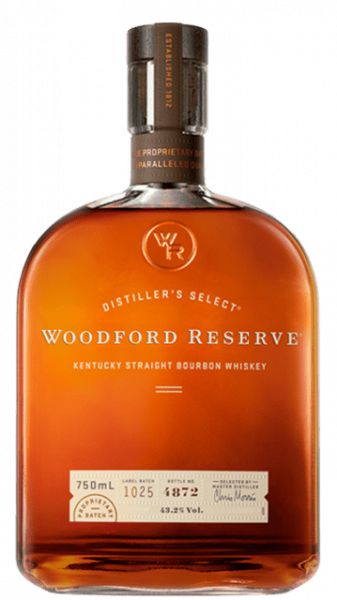 Woodford Reserve Straight Bourbon Whiskey is a highly respected bourbon with a reputation for being one of the best premium small batch Kentucky straight bourbon whiskies on the market today. In the world of whiskey, Woodford Reserve is one of the surest bets one can make when deciding on an exceptional choice of bourbon.

Produced in Woodford County, Kentucky, by the famed Brown-Forman Corporation, Woodford Reserve is famous for its use of copper pot still spirits during the production process. The bourbon is distilled and bottled at the Woodford Reserve Distillery in Versailles, KY, which has recently been named a national historic landmark due to its rich history dating all the way back to 1812.

Woodford Reserve Straight Bourbon Whiskey has won several awards since its introduction to the whiskey market in 1996, including winning double gold in 2005 and 2013 at the San Francisco World Spirits Competition. Most notably, Woodford Reserve has been named a “Tier 1” whiskey by the Whiskey Governing Body of America, cementing its place in the American whiskey hall of fame.

Woodford Reserve Straight Bourbon whiskey is a revered and respected bourbon within the whiskey industry for good reason. The extensive production and distillation process and exceptional attention to detail have resulted in Woodford Reserve being considered a top tier commercial whiskey.

With all that being said, some other whiskies have attained similar heights in the bourbon whiskey industry and are excellent alternatives to consider when looking for whiskey with similar flavor profiles to Woodford Reserve.

Woodford Reserve Bourbon has a fairly traditional mash bill, with its ingredient profile consisting of 72% corn, 18% rye, and 10% malted barley. However, a more unusual and unique aspect of Woodford Reserve is that the bourbon is distilled three separate times. This results in a tremendously refined and smooth tasting bourbon whiskey.

Woodford Reserve Straight Bourbon whiskey has a historical proof rating of 90.4 and is traditionally aged for just over 7 years. Interestingly, nearly 50% of each batch of Woodford Reserve is lost due to evaporation during the aging process, thus requiring the addition of column distilled spirits to the final batch to complete the bottling blend.

For this cocktail, you will need to gather 2 ounces of Woodford Reserve Bourbon, .5 ounces of raspberry syrup, .75 ounces of fresh lemon juice, and 3 to 4 drops of chocolate bitters.

As with many other bourbon cocktails, we recommend building this cocktail in a shaker filled with ice. Introduce all ingredients in whichever order you prefer to the shaker, then commence with vigorous shaking of the cocktail for 10 to 15 seconds. Once complete, strain the mixture into a martini glass, and garnish the cocktail with 1 or 2 raspberries. At this point, the cocktail is considered complete and ready to be served.

This cocktail is famous in whiskey circles in America and France due to its storied history and rich heritage. To begin, you will need to collect the following ingredients: .75 ounces of Woodford Reserve Bourbon, .75 ounces of sweet vermouth, and .75 ounces of Campari.

To begin, we recommend adding all of the ingredients to a mixing glass with ice. Once complete, stir the mixture for 10 to 15 seconds. Lastly, strain the mixture over ice into your whiskey tumbler of choice and add an orange twist for garnishing. At this point, the cocktail is ready to be served and enjoyed!

Aesthetically, Woodford Reserve Straight Bourbon is stunning. It is presented beautifully in a simple and elegant bottle, and the whiskey itself has a moderate golden amber hue.

The bourbon carries a unique aromatic profile that distinguishes it from many other bourbons on the market. Honey and spice notes are prevalent throughout and pair beautifully with undertones of toasted oak, creamy vanilla, and faint traces of butterscotch.

The bourbon has a robust flavor, with noticeable flavors of sweet rye, smooth espresso, almond, oak, and fine ginger.

Woodford Reserve Straight Bourbon’s finish is long and drawn out, with a singular overtone of smooth oak.