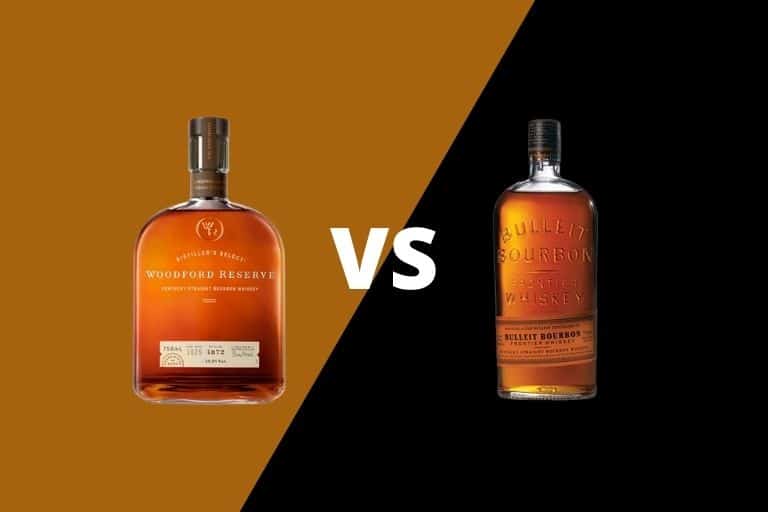 To the bourbon aficionado crowd, Bulleit Bourbon and Woodford Reserve are two well-known and well-respected brands in the premium segment of the bourbon category. But if you’re wondering why these brands are so well regarded among whiskey nerds, you’ve come to the right place.

In this post, we’ll peek behind the labels to learn more about what’s going on with the liquids inside. We’ll discover the production and maturation techniques that make them two go-to favorites for connoisseurs to enjoy neat, or on the rocks. After we’ve finished, you’ll be able to order confidently the next time you are at your favorite whiskey bar or bottle shop.

Bulleit Bourbon was launched in 1987 by founder Thomas Bulleit, Jr., who named the brand after his great-grandfather, an early settler and distiller in Kentucky in the 1830s. It was a small regional brand until it was purchased by Seagram in 1997. Backed by a large, international drinks company, Bulleit was able to expand its distribution footprint nationwide. It was added to Diageo’s portfolio in 2001 and was positioned for success as interest in the overall bourbon category grew during the mid-2000s.

Woodford Reserve was introduced in 1996, not long after the historic Woodford Reserve distillery was refurbished and reopened by Brown-Forman — the largest distilled spirits producer based in the United States. Much of the brand’s story revolves around the plant, founded as the Old Oscar Pepper Distillery in 1812. There, distiller Dr. James C. Crow made many contributions to the science of whiskey making, including advances in the sour mash process, testing mash for pH and sugar content and oak maturation. His Old Crow brand was a favorite of writer Mark Twain and U.S. General Ulysses S. Grant.

Diageo purchased the Bulleit brand in 2001 during the dissolution of Seagram’s international spirits portfolio. Diageo is the world’s largest spirits producer, and Bulleit is the focus of the company’s North American whiskey strategy.

In many ways, these two brands fight a proxy battle in the war of global whiskey supremacy. Diageo produces the Johnnie Walker brand of scotch whisky — the No. 1 selling whisky brand in sales volume in the world. Brow-Forman produces Jack Daniel’s Tennessee Whiskey – the No. 2 selling whiskey brand globally and the No. 1 brand of American whiskey.

With Bulleit and Woodford Reserve, the two powerhouse portfolios duke it out in the fast-growing premium bourbon segment.

Both mash bills could be considered high-rye recipes — with Bulleit having a larger proportion of the spicy rye grain in their overall grain bill. Rye grain is known for its peppery spiciness off the still, a flavor that only grows more complex and interesting as it spends time in contact with oak in the barrel. Using more core corn gives you a sweeter bourbon.

Note: ‘High-rye bourbon’ is an unregulated term to describe the approach the master distiller took when creating the mash recipe. It should not be confused with the rye whiskey category. Products labeled ‘Rye Whiskey’ must contain at least 51 percent rye in the list of grain ingredients by legal regulation.

Each of these brands has the term ‘Kentucky Straight Bourbon Whiskey‘ on the label, which gives us important information about the age of the spirit inside based on terms regulated by the U.S. Tobacco and Alcohol Tax and Trade Bureau. First, each is made in Kentucky. Whiskey is a distillate made from 100% grains. Bourbon must be made of at least 51 percent corn and matured in new American charred oak barrels. And a ‘Straight‘ whiskey must be matured for at least two years.

Neither has an age statement — a government-regulated statement about how long the spirit has been matured in wood barrels. While we don’t know the exact age of the barrels used in these bottles, we do know they are at least two years old, and it’s probably safe to assume a maturation period of four years or more.

Woodford Reserve highlights its historic bourbon distillery. But the brand backs up their marketing materials with a historical approach to whiskey production.

Most modern bourbon distilleries use large column stills to distill their products. These modern, high-capacity stills were invented in the 19th century and allow distillation of the spirit in one pass through a series of plates that redistill the alcohol vapors as they rise through the column.

If you are lucky enough to tour the Woodford Reserve Distillery near Versailles, Kentucky, you will notice three large pot stills that would look more at home in Scotland, where a traditional production method is a requirement for all single malt whiskies. These stills are an impressive sight for guests to the distillery and help show how whiskey was made before the invention of the column still.

But what is remarkable is that Woodford Reserve actively uses these pot stills to produce their whiskeys.

A portion of the barrels dumped for each batch of Woodford Reserve’s Distiller’s Edition — the most well-known and widely distributed expression — contain whiskey distilled in these old-school copper pot stills. Distillation in copper pot requires two passes — the first to turn the mash into low wines at about 60 percent alcohol by volume, the second to turn these low wines into newmake or white dog spirit. Other products, such as its high-end Master’s Collection bourbon, were made from 100 percent pot still whiskey.

Bulleit is produced using a column still at the Bulleit Distillery, which opened in 2017. While spirits produced on a pot still are not necessarily superior — delicious whiskeys come off a column, and some terrible whiskeys are made on pot stills — the use of copper pots give Woodford Reserve a unique product attribute that gives the resulting spirit some additional complexity.

An aside: The TTB does allow rounding of decimals. Kudos to the Woodford Reserve production team for nailing the decimal point on batches distilled on both column and pot stills.

Appearance: Bulleit has good legs down the glass at 90-proof. It is reddish-brown/amber in color, with a tawny hue.

Palate: Corn sweetness and a buttery mouthfeel, with the flavor of almonds, walnuts, chocolate, cinnamon, vanilla and raisins.

Now that we know a little more about these brands, it’s easier to understand why they are well known among the bourbon enthusiast crowd.

Certainly, being produced and promoted by large international spirits houses helps. Bulleit has done well since its acquisition by Diageo. It was named one of the top 20 fastest-growing spirits brands in global sales for 2018 by the IWSR, with over 12.9 percent growth year-over-year. And as a brand, Woodford Reserve sold about 900,000 cases that same year. Both of these brands were positioned to benefit from recent pandemic closures of on-premise bars and restaurants, which led to a trend of people purchasing spirits for home consumption.

But the main reason these brands resonate with bourbon drinkers is the delicious juice in those bottles. If you haven’t had either of these brands, try them for yourself! A side-by-side tasting between a glass of Woodford Reserve and Bulleit Bourbon is the perfect way to familiarize yourself with bourbon’s premium category. 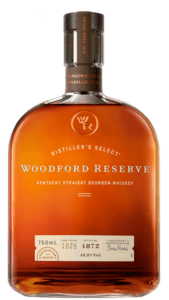