Odds are, if you know anything about the world of bourbon whiskey, then you’ve most likely heard about Blanton’s Single Barrel Bourbon whiskey. Introduced in 1984 as the first commercially available single barrel bourbon, Blanton’s has risen in popularity and demand due to the bourbon consumer market having a greater desire for well-crafted and unique spirits. If you have not yet had the pleasure of trying Blanton’s Single Barrel Bourbon, we would like to take this opportunity to pique your interest and explain what you might be missing out on.

First and foremost, it is important to note the family of spirits from which Blanton’s Bourbon comes from. Owned by Age International, Inc. and exclusively produced and distilled by the Sazerac Company, Blanton’s Single Barrel shares its roots with some of the whiskey industry’s most beloved brands.

The Sazerac Company oversees the production and distillation of some of the world’s most iconic spirit brands, including George T. Stagg, 1792, Southern Comfort, and Eagle Rare, so consumers can rest assured that Blanton’s Bourbon has a pedigree rich in quality and attention to detail. Being a member of the Sazerac Company family of spirits, Blanton’s Single Barrel Bourbon is distilled at the company’s Buffalo Trace Distillery, located in Frankfort, Kentucky.

While Blanton’s Single Barrel Bourbon’s official mash bill has not yet been made available to the public, most whiskey aficionados have ascertained that the whiskey is made using a significantly higher proportion of rye than most other bourbons. This fact is responsible for the more fruity and spicy characteristics that Blanton’s has become famous for.

The bourbon is typically aged between 6 to 8 years and is stored in Warehouse H, located at the Buffalo Trace Distillery site. Unlike the other on-site storage facilities, Warehouse H is a significant contributor to Blanton’s Bourbon’s unique flavor profile.

Warehouse H is the only all-metal storage structure on-site, giving the spirits that age in that facility a unique aging experience. The all-metal structure conducts heat much faster than non-metal structures on-site, accelerating the bourbon’s aging process. This enables the Sazerac Company to produce excellent batches of Blanton’s Bourbon faster than normal, thus enabling the company to keep up with consumer demands.

While many of us are very familiar with the “Old Fashioned” recipe, odds are, you’ve never quite experienced a Blanton’s Old Fashioned. You will first start by adding a cube of sugar to a glass already filled with ice for this cocktail. Second, add a few drops of orange bitters, then muddle the mixture with a teaspoon of water. Next, add a single large ice cube and top off the glass with bourbon, letting the mixture sit for about 30 seconds. Lastly, garnish the cocktail with a Luxardo cherry, and enjoy!

Another famous cocktail option, the Uptown Manhattan is taken to a whole other level with the addition of Blanton’s Bourbon. Start with 1.5 ounces of Blanton’s, then add .5 ounces of Carpano Antica and .5 ounces of Sibona Amaro. Stir the mixture together, then add a dash of Angostura Bitters and a tad bit of orange bitters. Lastly, introduce a spray of St. Elizabeth Allspice Dram as a finishing garnish, and get ready to have your mind blown!

From an aesthetic perspective, Blanton’s Single Barrel does not disappoint. The bourbon is visually stunning. The iconic bottle is a sight to behold on its own and is complemented by the bourbon’s gorgeous light amber hue.

Aromatically, Blanton’s Single Barrel is a force to be reckoned with. The bourbon exudes a symphony of citrus, caramel, and spicy vanilla notes that will be sure to leave you with a lasting impression.

As the overall tasting experience begins to wind down, Blanton’s Bourbon presents a grand finale, rich with spice and charred caramel, vanilla, and sugar. 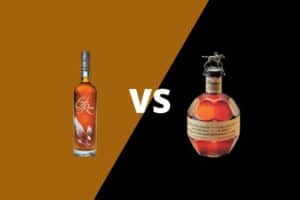