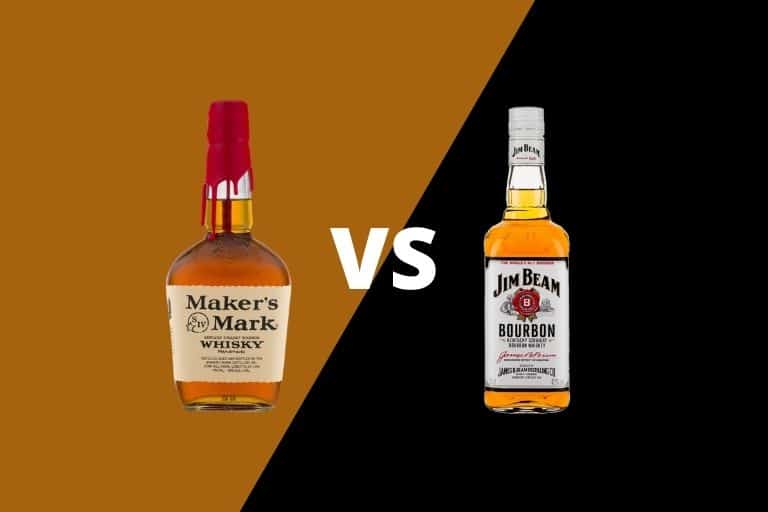 Today’s matchup is between two brands of whiskey that fall under the same family tree. One an iconic bourbon, top-selling Jim Beam — the most well-known name coming out of Kentucky. The other, a premium bourbon with the signature wax seal — a fan favorite among those who fancy a smooth and mellow whiskey in their glass.

Despite being from the same family, these two products are about as different as they can be. So, in this post we’ll examine how each of the respective production teams are able to deliver an entirely different take on straight bourbon whiskey.

This is a story of two brands that today fall under the same ownership umbrella. It gives us the perfect opportunity to look at the industry’s history — and enjoy a brief economics lesson.

For this type of storytelling, a timeline seems fitting.

In 1795, Johannes ‘Jacob’ Beam sold his first barrel of whiskey. He made it in the ‘new style’ that would eventually become known as bourbon.

In 1889, George R. Burks broke ground on a distillery in Loretto, Kentucky.

In 1890, the American Tobacco Company was founded in Durham, North Carolina.

In 1917, Woodrow Wilson signed a temporary prohibition on alcohol to secure grain and ethanol capacity for the war effort during World War I.

In 1919, the 18th Amendment to the U.S. Constitution was ratified, prohibiting the manufacture, sale and consumption of alcohol in the United States.

In 1930, the Smoot-Hawley Tariff Act was passed by congress, which worsened the Great Depression according to many economists.

In 1932, President Franklin Delano Roosevelt won election, thanks in part to his promise of ending Prohibition. The potential jobs that were to be created by a resurgent beverage industry became a persuasive argument for voters who had grown tired of the Great Depression.

In 1933, the 21st Amendment ended Prohibition. After 13 years, distillation surged back to meet the pent-up demand of a thirsty nation.

In 1953, T. William ‘Bill’ Samuels purchased the Burks Distillery for $35,000. His Maker’s Mark brand is launched the following year.

In 1987, Hiram Walker & Sons was acquired by Allied Domecq.

In 2005, Allied Domecq was acquired by Pernod Ricard, who then sold the Maker’s Mark brand to Fortune Brands.

In 2011, Fortune Brands split off its alcohol business to create Beam Inc.

In 2014, Beam Inc. was acquired by Suntory. The U.S. holding company Beam Suntory was formed to oversee the North American portfolio.

The most significant differences between these two brands are their flavoring grains. So we’ll focus on the use of traditional spicy rye grain versus soft, red winter wheat.

Jim Beam’s grain recipe of about three-quarters corn with the remaining grain split between rye and malted barley is considered a traditional bourbon mash bill. Which makes sense. After all, when you are the No. 1-selling brand of bourbon in the United States, it goes a long way in moving the needle on what’s considered ‘traditional.’ The use of corn gives the resulting bourbon its sweetness, while the rye adds a spicy character to the finished product.

Maker’s Mark utilizes what is known as a ‘wheated’ mash bill to give the bourbon a smooth and mellow character. The use of soft, red winter wheat — as opposed to the traditional rye — gives the finished product a rounded, softer flavor profile. Many people find Maker’s Mark and other wheated bourbons like Old Fitzgerald more approachable, which helps explain the brand loyalty felt by many bourbon enthusiasts who list Maker’s Mark among their favorites.

Both brands are produced by parent company Beam Suntory, but they are distilled and matured at entirely different facilities. As far as we can tell, production lines are completely independent for Maker’s Mark.

Beam Suntory owns three production sites in Kentucky: the Booker Noe plant in Boston, the Jim Beam Distillery in Bardstown and the Marker’s Mark Distillery in Loretto. All three of the sites utilize modern column distillation techniques. In terms of production capacity, the Booker plant is the largest, followed by Beam, then Maker’s.

Jim Beam is produced primarily at the Jim Beam Distillery. But nearly all of the products in the Beam portfolio utilize the same mash bill — with notable exceptions being Maker’s Mark and Basil Hayden’s bourbons. So, barrels filled and matured at both the Jim Beam and Booker Noe sites may be dumped for any given batch of products bottled under the Jim Beam label.

The wheated mash bill of Maker’s Mark likely takes up nearly all the production capacity at its namesake distillery.

After your bourbon distiller has completed fermentation and distillation, the new make spirit is ready to fill an American oak barrel and take a rest. The maturation process turns ‘white dog’ into whiskey and gives the clear distillate all its color and much of its flavor.

By law, bourbon must be matured in new American charred oak barrels. Both of these bourbons are labeled as Kentucky Straight Bourbon Whiskeys, which require maturation for at least two years. Neither product carries an age statement stating the number of years it has been aged.

There are a couple of unique approaches to the Maker’s Mark maturation process. One is its use of dunnage-style stone cellared warehouses. While most of the warehousing facilities on the Maker’s Mark site are traditional multi-stories rickhouse structures made of wood and tin that dot the Kentucky landscape, dunnage warehouses are one-story structures traditionally used in the production of Scotch whisky. Specialty offerings, like their Private Select single barrels that Maker’s has released, are matured exclusively in these limestone-cellared structures.

Other Maker’s Mark expressions — including Maker’s 46 — use additional wood staves in finishing barrels to offer additional flavor notes. These staves are placed inside the barrel and run across the diameter of the cask. Toasted French oak staves give Maker’s 46 a unique finish. Other types of wood staves are used in the Private Select single barrel program, in which customers can create their own expressions using combinations of these staves for a one-of-a-kind barrel.

Maker’s Mark retails for about $30 for a 750mL bottle and is bottled at 90-proof, or 45 percent alcohol by volume.

Jim Beam white label is bottled at 80-proof, or 40 percent ABV and has a recommended retail price of about $18.

These two brands were never meant to compete side-by-side. They are positioned in separate price segments to appeal to customers within entirely different demographics.

Jim Beam white label is priced within the standard pricing segment. It is second only to Jack Daniel’s in name recognition throughout the entire American whiskey category. For the bourbon enthusiast, it is a reasonably-priced bourbon that delivers what is intended. For the customer new to the bourbon category, it is the perfect introduction to how they should expect bourbon to taste. And for the on-premise bar manager, it is an ideal bourbon with which to make reasonably-priced cocktails because it is a moderately-priced brand with which customers are familiar.

Maker’s Mark is priced within the premium pricing segment. However, at $30 per bottle, it is priced below comparable competitors. As a small-batch bourbon offering, it offers an excellent opportunity for the whiskey drinker who has become familiar with the flavor of traditional rye bourbon recipes and standard-segment whiskey and would like to trade up to a new, more refined experience.

Description: In the glass, Maker’s Mark has an amber-honey complexion. 90-proof bottling strength gives it strong ‘legs’ that run down the glass when the liquid is swirled.

Description: In the glass, Jim Beam is golden-amber in color.

Sure. Maker’s Mark costs a little more. But remember — for the extra money, you do get a 90-proof bourbon with higher alcohol content and the opportunity to try a wheat bourbon.

Although they are from different pricing segments, there is a lot to be learned by pouring a couple fingers of bourbon and putting them side-by-side for a blind taste comparison: Original recipe vs. wheat bourbon being foremost.

If you fancy yourself an American bourbon drinker, adding these two brands to your tasting repertoire is certainly a great step towards becoming an expert.