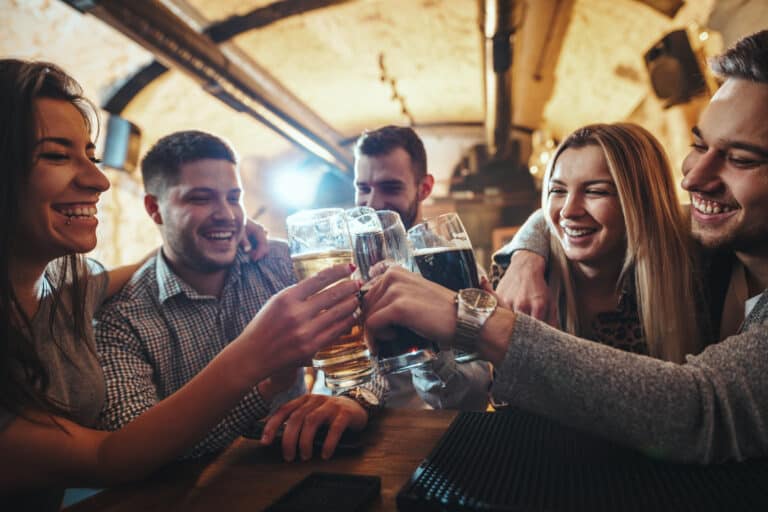 Across the globe, one of the best places to mix it up and socialize is the local watering hole. A pub or a bar is a fantastic place to meet new people or liven up your evening. However, there are specific unspoken rules that drinkers must follow if they don’t want to look out of place. There is a certain etiquette to drinking culture, and many traditions have been passed down through the ages. There are certain rituals and procedures when drinking in many countries, and not following these guidelines might even cause offense. So what are these unspoken rules, and where did they come from anyway? This article will detail everything you need to know about drinking culture and drinking etiquette, so you will look like a pro the next time you belly up to the bar.

In most countries, drinking culture is the set of rules, traditions, or social actions that come with consuming alcoholic beverages for pleasure. Even though these rules may differ from one country to the next, it is safe to say that the existence of such traditions highlights the impact drinking alcohol has had on cultures everywhere. Almost every civilization on the planet has independently stumbled on the process of distilling spirits, fermenting wine, and brewing beer.

The influence of alcohol is quite prevalent in many societies throughout time. In fact, drinking is even well documented in religious texts such as the Quran and both the Christian and Hebrew Bibles. It was often the subject of works of art and literature in Greek and Roman history and is even present in works such as Confucious’s Analects and Homer. Susfisive to say, the ancients were quite fond of their drink.

In modern times, a popular activity for those of legal drinking age is “social drinking.” Social drinking involves the casual consumption of alcoholic beverages, usually in a group setting, without the goal of becoming inebriated.

In Western societies, when someone receives good news, it is usually celebrated by going out for drinks. For instance, booze might be served when a couple gives birth or gets a promotion at work.

In most cases, a round of drinks is a phrase that refers to a set of alcoholic beverages that were purchased by one person. Generally, this person is part of a group, and they are buying a drink for themselves as well as all other members of the group. In many places around the world, it is customary for each group member to take turns to buy a round in succession.

This is a nearly ubiquitous custom in countries such as Australia, Ireland, United Kingdom, Canada, and New Zealand. In New Zealand and Australia, this custom is called “shouting.”

Buying rounds is also quite customary in many places in North America. This is especially true where many people identify their cultural roots with Ireland or the U.K.

Interestingly enough, the U.K. State Management Scheme forbade patrons from buying rounds in the year 1916. That declaration was short-lived, however, and was repealed in 1919.

The branches of the United States military have an exciting tradition to determine who will buy a round of drinks. Members will often carry around a “challenge coin” for this very situation. One group member will lay down their coin, and each other member is expected to present theirs as well. If any group member is without their coin, they are responsible for buying the next round for their peers. If everyone can produce a challenge coin, the original challenger must then purchase a round for the group.

The Ins and Outs of Drinking Etiquette

In order to clarify the procedures and expectations of ordering beverages at an English public house, a retired London journalist by the name of William Greaves set out to create a standardized guideline for patrons. The etiquette guidelines were initially published in the later defunct Today publication. These guidelines become more commonly known as “Greaves’ Rules” and were based on William’s own observations and experiences when frequenting pubs.

These rules were later revived and became widespread when posted in the Daily Telegraph in November of 1993. The rules were a hit and were soon reproduced and posted in bars throughout the United Kingdom.

Greaves’ Rules themselves were highly influential at the time of their conception, and traces of their popularity can still be seen in bar culture today. Some of them sound like common courtesy, while others are a little more in-depth.

First, Greaves stated that when an individual arrives at a pub, the standard practice is to purchase a drink for that person. From that point, the unspoken rule is that when the glass is nearly finished, the one who first received the drink will reciprocate the offer. The basis for these rules and procedures is trust in your companions and the notion that each patron will play fair and adhere to the guidelines.

However, are a few occasions where the rules can be broken. For example, one of the drinkers may be required to perform a task that is more important than sticking to the rules. In that case, the rules are suspended, and that person can carry out their task (if deemed necessary enough). Greaves even itemized examples of these instances in his publication. These exemptions can now be found in the Oxford Pub Guide and pertain to rules 7 and 8 if you are interested in researching on your own.

Later, a social anthropologist by the name of Kate Fox created a similar guideline when she published her book Watching the English. Fox concluded that the procedures were initially produced to reduce the possibility of confrontation or violence among the drinking companions in a pub.

In addition to the rules produced by Greaves, there are a few more common drinking courtesies that are observed in many cultures. For example:

Numerous cultures also have traditions that feature the act of purchasing a complimentary alcoholic beverage for someone. For example, many people practice this custom during a bar mitzvah or a wedding reception. The free drinks are generally served to the guests of these events in what is commonly referred to as an “open bar.” Open bars are often seen at weddings and other celebratory events where the host wants guests to join in the jubilation.

Certain business functions will also utilize this tactic in order to increase their attendance. One such example of this is offering free drinks to patrons of casinos so they will lower their inhibitions and continue gambling.

Some bars and establishments even offer a “ladies night” where ladies can drink free of charge. This increases the amount of paying customers (men) who are interested in meeting women.

In Japan, many large corporations feature an open bar when they are holding a private function. These open bars will offer free drinks to their employees and other attendees.

This is a term that is relatively common throughout England and Ireland. Session drinking is when a person or a group consumes a sizable quantity of beer during a specific period or “session.” Although many become intoxicated, the goal is not to get hammered. In general, a session is a social occasion among friends.

There is even a special beer, known as a “session beer,” which has a lower than average alcohol content. That way, the consumer can drink more beer throughout the session without getting drunk. Many drinkers who participate in session drinking begin in the daylight hours and continue drinking into the evening. Session beers were created to make this style of drinking possible without getting blackout drunk.

In the U.S., writer Lew Bryson has coined a new definition for a session beer. He claims that session beer is any beer whose ABV is below 4.5%. Many large breweries, such as Notch Brewing, adhere to this specification of a session beer.

The Brewer Association has even introduced a new category to the Great American Beer Fest competition for a session beer. However, their definition states that a session beer cannot exceed 4.1% ABV.

Vertical drinking is a playful term that simply means that all participants or patron must remain standing up when drinking. It is generally held that vertical drinking will produce a faster rate of consumption that sit down drinking. This more rapid consumption often leads to violence and disorder. Some patrons might disrupt others while merely trying to navigate the bar.

The most practical definition of “binge drinking” is drinking alcoholic beverages to excess. This behavior is usually seen in younger adults, most often on college campuses in the United States.

As reported by the National Institute on Alcohol Abuse and Alcoholism, binge drinking is defined as a pattern of consuming alcohol that elevates the user’s blood alcohol concentration (also known as BAC) to a level of 0.08 grams percent or higher. For most adults, this pattern would refer to drinking more than five drinks in two hours for men and for or more drinks in two hours for women.

What is defined as binge drinking has been revisited and adapted over the past few years. Whatever the definition, it refers to drinking an amount of socially unacceptable alcohol in a given amount of time. In the past, the phrase “going on a binge” or “going on a bender” referred to drinking steadily over the course of a few days or until that person was physically incapable of drinking any more. The earliest known instance of this phrase dates back to 1894, which “binge” is derived from the old English word meaning to “fill a boat with water” or to soak.

The last drinking custom is reasonably uncommon; however, it is still worth mentioning. That custom, of course, is “speed drinking.” Speed drinking is a type of competitive drinking that generally involves a smaller quantity of beer that is supposed to drink in the fastest time possible. The intention is to drink quickly without getting overly intoxicated. Speed drinking is quite entertaining to watch as a spectator, but it is not recommended that amateurs attempt this feat. Those who are not accustomed to large quantities of alcohol in a short period can get alcohol poisoning and put themselves in danger.

Unlike binge drinking, this type of drinking aims to win a competition or establish a time record. In most cases, speed drinkers will consume a light beer, typically a lager. They will also allow the beer to become warm or at least room temperature, making it lose carbonation and become easier to drink.

Drinking has been documented in recorded history even to ancient civilizations. Drinking customs may vary around the world, but drinking etiquette is present in most modern-day drinking cultures. However, you choose to observe these rules and guidelines; one thing is for sure. When done correctly and respectfully, drinking can be an enjoyable event that can be appreciated by all.