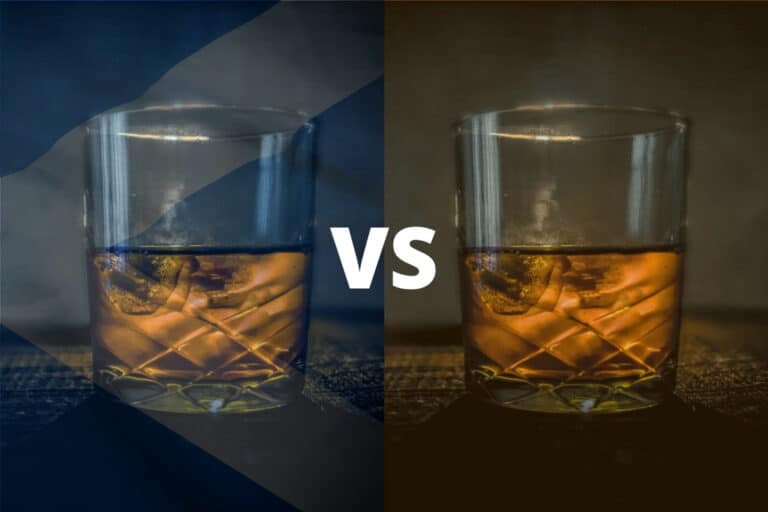 Is whisky scotch? Or, is scotch whisky?

Let’s explore the nuanced usage of these terms. Consider this post your scotch whisky 101 course. We’ll take a deep dive into what scotch is and how it compares and contrasts with whiskies and other distilled spirits the world over. And we’ll try to answer some oft-asked questions about both product categories.

But first: One quick note about spelling…

Americans and Irish spell whiskey. The Scots, Japanese, Aussies and Canadians spell whisky. We’ll use them interchangeably in this post for kicks.

Is all scotch is whisky? Yes. Is all whiskey a scotch? No.

Got that? Good. It will make the rest of this post a lot less intimidating…

The main difference between scotch whisky and other types of whisky — most notably American bourbon and rye whiskey, Canadian whiskey and Irish whiskey — is the special role malted barley plays in the production of the spirit. Unlike whiskies from North America, there is nearly no use of rye grain in the mash — except for a few newer, innovative, small-production brands.

To learn more, check out our complete guide to Mashbills.

The art of distillation — separating ethyl alcohol or another substance from the original solution in which it was a part — was fine-tuned in the Middle East sometime during the Medieval period. There, Islamic scholars perfected the art of distilling an essence of an object, often in search of ways to extract aromatic compounds. For example, by macerating rose petals in an alcoholic solution and then heating that liquid, the alcoholic vapors could be collected, cooled and condensed into a concentrated solution with the essence of rose — what we might consider perfume.

As part of a society that abstained from alcoholic beverages, these scholars did not recognize the utility of creating liquids of ever-increasing alcoholic strength. But the Christian monks who traveled to the area during the Crusades did. In fact, many were winemakers and brewers by craft. So, as they returned to Europe, they quickly learned that by distilling wine, beer or any other fermented alcoholic beverage, they could end up with ‘aqua vitae,’ Latin for the water of life — the original descriptor for this essence of alcohol.

When these monks reached the British Isles, where the fermented beverages of choice included grain-based beer, distillation yielded uisce beatha in Irish and uisge beatha in Scots Gaelic — both terms translating to ‘water of life‘ in the local dialect. This term was later anglicized to ‘whisky.’

The debate as to whether Irish or Scots were distilling whiskey first is nearly as old as the spirit itself. While there are passionate arguments for both sides, it’s an answer that is cloudy at best.

History of distillation in Scotland

While Scots may have distilled spirit as early as about 1000 CE, the first recorded description of scotch whisky came in 1494.

“To Friar John Cor, by order of the King, to make aqua vitae, VIII bolls of malt.”

This line was recorded in the King of England’s Exchequer Rolls of Scotland in June of 1494. These tax collection documents casually mentioned the use of malted barley. That malted barley was measured in bolls, equal to about six bushels. The fact that it referenced a friar highlights the church’s role in the brewing, winemaking and distillation scene at the time. Its use in ‘aqua vitae‘ — aka uisge beatha — the spirit of life — makes it the perfect anecdote for the early history of scotch whisky production.

The fiercely independent Scots resented taxes to what many considered a foreign monarch. So when the crown introduced taxes on whisky production beginning in 1644, it set the scene for centuries of illicit distillation.  The crown confiscated more than 1,000 illicit stills in the Highlands during the year 1782 alone.

Why is scotch so expensive?

Short answer: It isn’t expensive unless you want it to be. There are many affordable versions of blended scotch in the value and standard pricing segments, including Johnnie Walker Red Label, Dewar’s, the Famous Grouse and Cutty Sark. But some of the most expensive bottles of distilled spirits ever sold were scotch, including many single malts from now-shuttered distilleries. Brands also take advantage of the ultra-premium and exclusive travel segments to extract value from well-to-do whisky aficionados. Bottles like Johnnie Walker Blue Label, Bowmore 30, Macallan 52 year and other hard-to-find offerings are some of the most expensive bottles of booze on the market.

In most countries — including the United States and the United Kingdom, where scotch is made — whiskey must contain 100 percent grains.

One notable exception to this rule is India. Ongoing trade disagreements between the Indian and U.K. governments are inhibiting the import/export markets in the respective countries. India allows sugar cane syrup to be included in a whisky grain mash — a move that would require the product to be labeled as rum in the U.S., U.K. and E.U. India is the largest export market for scotch by volume, so this disagreement may cause headaches for whisky makers in Scotland down the road.

The U.S. remains the No. 1 export market for scotch by value.

The term ‘whiskey’ describes a distilled spirit made from grains. Nearly all whiskey-producing countries — including the United States, Scotland, Ireland, and Canada — require that whiskey must contain 100 percent grains. The term mash bill is used to describe the list of grain ingredients.

A key difference between scotch and other countries is the use of enzymes vs. malted barley.

Traditionally, malted grains are used during the saccharification phase, in which starches in the grains are converted into sugars. Nearly all grains can be malted — a process where grain is induced to germinate, and then the process is halted with heat. But the level of enzymes in the malted barley is off the charts compared to any other grains, so it has a long history of being used in all types of beer and whiskey.

One key difference between the regulations governing scotch and American whiskey — including bourbon whiskey — is the use of enzymes. This conversion breaks down the long starch molecules naturally found within grains like corn, wheat and rye into sugar molecules the yeast can metabolize during fermentation.

In the United States and other countries, distillers use lab-created enzymes to help encourage the starch-to-sugar conversion called saccharification during the cooking phase. But under the laws governing scotch production, distillers can only use naturally-occurring enzymes found within the grain to produce their fermented grain mash.

Though this seems like a relatively minor distinction, it has significant ramifications for whisky production.

In the United States, it is relatively easy for whiskey producers to create mash bills that are 100 percent corn or 100 percent rye through the use of enzymes. But in Scotland it would be nearly impossible to get a beer with a high enough ABV to distill into whiskey without malted barley because of the ban on the use of lab-produced enzymes.

Let’s talk about the use of peated barley.

Some people describe scotch whisky as smoky. That is true, but only about a specific sub-segment of whiskies. Traditionally, scotch whisky gets its smoky flavor from peat smoke to dry the grains during the malting process.

First, grains are soaked to induce germination, then heated and dried before the growing plant uses the enzymes to grow. On the Isle of Islay, the tradition of drying these grains using peat smoke — as opposed to wood or natural gas — to dry the grain is reflected in the use of peated malt to this day. Peat is an old-school fuel source cut from the many dried peat bogs located throughout the British Isles. The rich peat smoke gives the resulting whisky its distinctive smoky flavor, sometimes described as medicinal.

Peated single malt whiskies from the Islay region include Ardbeg, Lagavulin, Bowmore and Laphroaig. Blended scotch whiskies, including Johnny Walker, often include a bit of peated single malts in their blends.

Since we discussed Islay, it makes sense for us to mention the other regions. Single malt distilleries in Scotland are broken up into five distinct regions: the Highlands, Lowlands, Speyside, Campbeltown and Islay. Each is known for its distinctive style.

The Highlands produce bright, floral and fruity whiskies. The Lowlands are known for their no-nonsense practical approach to whiskies. Speyside boasts the spring-fed waters of the River Spey — or Speyburn — which give the finished whiskeys a beautiful minerality and depth. With only five active distilleries, Campbeltown is the smallest region. It offers whisky hunters a chance at elusive prey. And the Isle of Islay offers peat smoke and the sea brine character of crashing waves along the shores of the dunnage warehouses where the barrels of spirit slumber.

The current rules governing scotch whiskey production were passed by U.K. Parliament in 1988, with revisions in 2009. They state that:

After distillation, the clear, unaged new make spirit is placed into oak barrels to mature, giving it the dark color and flavor associated with scotch whisky.

Most of these wooden barrels come from the United States, where laws governing bourbon, rye whiskey and Tennessee whiskey require the use of new American charred oak barrels. These barrels make their way across the Atlantic to be reused by scotch producers, many of which have coopers that recondition reused wooden casks from America. The 250-liter hogshead cask is made using reconditioned staves from standard 53-gallon bourbon oak casks.

Single Malt Scotch — Must be made in a single distillery using a mash of 100 percent malted barley.

Blended Malt Whisky — A blend of single malt whiskies made at different distilleries.

Blended Scotch Whisky — A blend of any of the types of whiskey listed above.

How Scotch Stacks Up to Other Whiskies

Canadian whisky is a product of its environment. Because of its history as a Commonwealth country, it shares a history with whiskies from the United Kingdom, i.e., scotch. But because of its shared border with the United States, it shares some similarities with bourbon, i.e., the use of rye grain.

The No. 1 selling Canadian whisky is Crown Royal.

Irish whiskey has many similarities with scotch — from both a historical and production standpoint. Both countries produce single malt and blended whisky, the former being made with 100 percent malted barley.

However, where most single malt whiskies from Scotland are double distilled, most from Ireland are utilize triple distillation in a copper pot. Irish whiskey also boasts a unique product called Single Pot or Copper Pot Irish whiskey, a combination of 100 percent single malt and a mash bill containing a blend of malted and unmalted barley.

To learn more, check out this article: Irish Whiskey vs. Scotch.

Bourbon describes a whiskey made of at least 51 percent corn, with the remainder composed of wheat, rye and/or malted barley.

To learn more, check out this article: Bourbon vs. Scotch.

Japanese whisky is similar to scotch due to roots that stretch to the Scotland of the early 20th century. Masataka Taketsuru is considered by most to be the founder of Japanese whisky. In 1918, Taketsuru traveled to Scotland to enroll in the University of Glasgow to study chemistry. The next year he took an apprenticeship at Longmore Distillery and fell in love with the Scottish traditions of single malt distillation. When he returned to Japan, he joined forces with wines and spirits merchant Shinjiro Tori to found Suntory before striking out on his own to create the Nikka brand.